Does PG&E Corporation (NYSE:PCG) represent a good buying opportunity at the moment? Let’s quickly check the hedge fund interest towards the company. Hedge fund firms constantly search out bright intellectuals and highly-experienced employees and throw away millions of dollars on satellite photos and other research activities, so it is no wonder why they tend to generate millions in profits each year. It is also true that some hedge fund players fail inconceivably on some occasions, but net net their stock picks have been generating superior risk-adjusted returns on average over the years.

PG&E Corporation (NYSE:PCG) shareholders have witnessed a decrease in activity from the world’s largest hedge funds recently. PCG was in 67 hedge funds’ portfolios at the end of the second quarter of 2019. There were 72 hedge funds in our database with PCG holdings at the end of the previous quarter. Our calculations also showed that PCG isn’t among the 30 most popular stocks among hedge funds.

Unlike some fund managers who are betting on Dow reaching 40000 in a year, our long-short investment strategy doesn’t rely on bull markets to deliver double digit returns. We only rely on hedge fund buy/sell signals. Let’s take a look at the key hedge fund action surrounding PG&E Corporation (NYSE:PCG).

How have hedgies been trading PG&E Corporation (NYSE:PCG)?

At the end of the second quarter, a total of 67 of the hedge funds tracked by Insider Monkey held long positions in this stock, a change of -7% from one quarter earlier. Below, you can check out the change in hedge fund sentiment towards PCG over the last 16 quarters. So, let’s see which hedge funds were among the top holders of the stock and which hedge funds were making big moves. 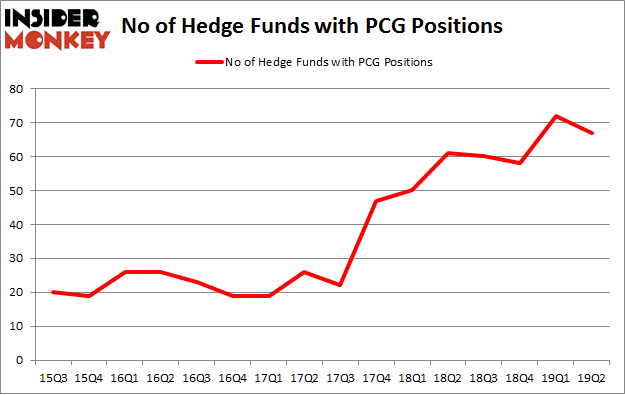 According to publicly available hedge fund and institutional investor holdings data compiled by Insider Monkey, David Abrams’s Abrams Capital Management has the biggest position in PG&E Corporation (NYSE:PCG), worth close to $573 million, corresponding to 15.6% of its total 13F portfolio. On Abrams Capital Management’s heels is Baupost Group, managed by Seth Klarman, which holds a $561.5 million position; the fund has 5.1% of its 13F portfolio invested in the stock. Some other members of the smart money that are bullish contain Kevin Michael Ulrich and Anthony Davis’s Anchorage Advisors, David Tepper’s Appaloosa Management LP and Tom Wagner and Ara Cohen’s Knighthead Capital.

Seeing as PG&E Corporation (NYSE:PCG) has witnessed declining sentiment from the smart money, it’s safe to say that there lies a certain “tier” of fund managers that decided to sell off their full holdings heading into Q3. It’s worth mentioning that Paul Singer’s Elliott Management said goodbye to the largest investment of the “upper crust” of funds monitored by Insider Monkey, totaling close to $124.6 million in call options. Eric Cole’s fund, Warlander Asset Management, also dumped its call options, about $80.2 million worth. These bearish behaviors are interesting, as total hedge fund interest was cut by 5 funds heading into Q3.

As you can see these stocks had an average of 21.25 hedge funds with bullish positions and the average amount invested in these stocks was $599 million. That figure was $6317 million in PCG’s case. ABIOMED, Inc. (NASDAQ:ABMD) is the most popular stock in this table. On the other hand Nomura Holdings, Inc. (NYSE:NMR) is the least popular one with only 7 bullish hedge fund positions. Compared to these stocks PG&E Corporation (NYSE:PCG) is more popular among hedge funds. Our calculations showed that top 20 most popular stocks among hedge funds returned 24.4% in 2019 through September 30th and outperformed the S&P 500 ETF (SPY) by 4 percentage points. Unfortunately PCG wasn’t nearly as popular as these 20 stocks and hedge funds that were betting on PCG were disappointed as the stock returned -56.4% during the third quarter and underperformed the market. If you are interested in investing in large cap stocks with huge upside potential, you should check out the top 20 most popular stocks (see the video below) among hedge funds as many of these stocks already outperformed the market in Q3.