Investing in hedge funds can bring large profits, but it’s not for everybody, since hedge funds are available only for high-net-worth individuals. They generate significant returns for investors to justify their large fees and they allocate a lot of time and employ complex research processes to determine the best stocks to invest in. A particularly interesting group of stocks that hedge funds like is the small-caps. The huge amount of capital does not allow hedge funds to invest a lot in small-caps, but our research showed that their most popular small-cap ideas are less efficiently priced and generate stronger returns than their large- and mega-cap picks and the broader market. That is why we pay special attention to the hedge fund activity in the small-cap space. Nevertheless, it is also possible to find underpriced large-cap stocks by following the hedge funds’ moves. In this article, we look at what those funds think of TCF Financial Corporation (NASDAQ:TCF) based on that data.

TCF Financial Corporation (NASDAQ:TCF) was in 28 hedge funds’ portfolios at the end of September. TCF shareholders have witnessed an increase in enthusiasm from smart money recently. There were 20 hedge funds in our database with TCF positions at the end of the previous quarter. Our calculations also showed that TCF isn’t among the 30 most popular stocks among hedge funds (click for Q3 rankings and see the video at the end of this article for Q2 rankings).

We leave no stone unturned when looking for the next great investment idea. For example one of the most bullish analysts in America just put his money where his mouth is. He says, “I’m investing more today than I did back in early 2009.” So we check out his pitch. We read hedge fund investor letters and listen to stock pitches at hedge fund conferences. This December, we recommended Adams Energy as a one-way bet based on an under-the-radar fund manager’s investor letter and the stock is still extremely cheap despite already gaining 20 percent. With all of this in mind let’s go over the latest hedge fund action regarding TCF Financial Corporation (NASDAQ:TCF).

What have hedge funds been doing with TCF Financial Corporation (NASDAQ:TCF)?

At Q3’s end, a total of 28 of the hedge funds tracked by Insider Monkey were bullish on this stock, a change of 40% from the previous quarter. On the other hand, there were a total of 24 hedge funds with a bullish position in TCF a year ago. With hedge funds’ sentiment swirling, there exists a select group of noteworthy hedge fund managers who were increasing their stakes substantially (or already accumulated large positions). 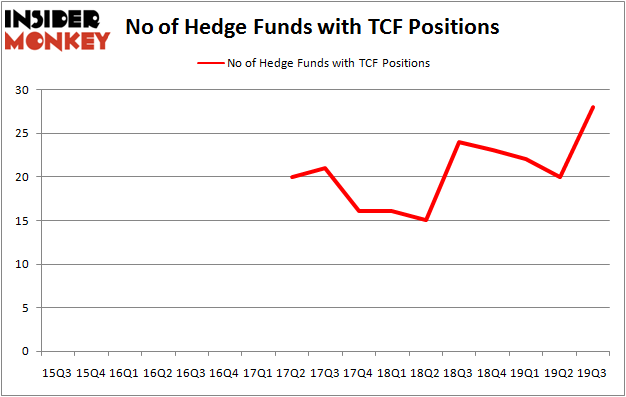 More specifically, Millennium Management was the largest shareholder of TCF Financial Corporation (NASDAQ:TCF), with a stake worth $85.8 million reported as of the end of September. Trailing Millennium Management was Citadel Investment Group, which amassed a stake valued at $74.9 million. Arrowstreet Capital, Pzena Investment Management, and D E Shaw were also very fond of the stock, becoming one of the largest hedge fund holders of the company. In terms of the portfolio weights assigned to each position Castine Capital Management allocated the biggest weight to TCF Financial Corporation (NASDAQ:TCF), around 5.23% of its 13F portfolio. Azora Capital is also relatively very bullish on the stock, dishing out 4.38 percent of its 13F equity portfolio to TCF.

Now, specific money managers have been driving this bullishness. Azora Capital, managed by Ravi Chopra, created the most valuable position in TCF Financial Corporation (NASDAQ:TCF). Azora Capital had $19.8 million invested in the company at the end of the quarter. Paul Magidson, Jonathan Cohen. And Ostrom Enders’s Castine Capital Management also made a $19.1 million investment in the stock during the quarter. The following funds were also among the new TCF investors: Gregg Moskowitz’s Interval Partners, Dmitry Balyasny’s Balyasny Asset Management, and Noam Gottesman’s GLG Partners.

As you can see these stocks had an average of 21.5 hedge funds with bullish positions and the average amount invested in these stocks was $436 million. That figure was $359 million in TCF’s case. GDS Holdings Limited (NASDAQ:GDS) is the most popular stock in this table. On the other hand Enel Chile S.A. (NYSE:ENIC) is the least popular one with only 8 bullish hedge fund positions. TCF Financial Corporation (NASDAQ:TCF) is not the most popular stock in this group but hedge fund interest is still above average. Our calculations showed that top 20 most popular stocks among hedge funds returned 41.1% in 2019 through December 23rd and outperformed the S&P 500 ETF (SPY) by 10.1 percentage points. Hedge funds were also right about betting on TCF, though not to the same extent, as the stock returned 33.8% during 2019 (as of 12/23) and outperformed the market as well.