T-Mobile US, Inc. (TMUS): Are Hedge Funds Right About This Stock?

Coronavirus is probably the #1 concern in investors’ minds right now. It should be. We estimate that COVID-19 will kill around 5 million people worldwide and there is a 3.3% probability that Donald Trump will die from the new coronavirus (read the details). In these volatile markets we scrutinize hedge fund filings to get a reading on which direction each stock might be going. Before we spend countless hours researching a company, we like to analyze what insiders, hedge funds and billionaire investors think of the stock first. This is a necessary first step in our investment process because our research has shown that the elite investors’ consensus returns have been exceptional. In the following paragraphs, we find out what the billionaire investors and hedge funds think of T-Mobile US, Inc. (NYSE:TMUS).

T-Mobile US, Inc. (NYSE:TMUS) was in 61 hedge funds’ portfolios at the end of the fourth quarter of 2019. TMUS investors should be aware of a decrease in hedge fund sentiment in recent months. There were 64 hedge funds in our database with TMUS holdings at the end of the previous quarter. Our calculations also showed that TMUS isn’t among the 30 most popular stocks among hedge funds (click for Q4 rankings and see the video below for Q3 rankings).

We leave no stone unturned when looking for the next great investment idea. For example Europe is set to become the world’s largest cannabis market, so we check out this European marijuana stock pitch. We read hedge fund investor letters and listen to stock pitches at hedge fund conferences, and and go through short-term trade recommendations like this one. We even check out the recommendations of services with hard to believe track records. In January, we recommended a long position in one of the most shorted stocks in the market, and that stock returned more than 50% despite the large losses in the market since our recommendation. Keeping this in mind we’re going to take a glance at the latest hedge fund action regarding T-Mobile US, Inc. (NYSE:TMUS).

How are hedge funds trading T-Mobile US, Inc. (NYSE:TMUS)? 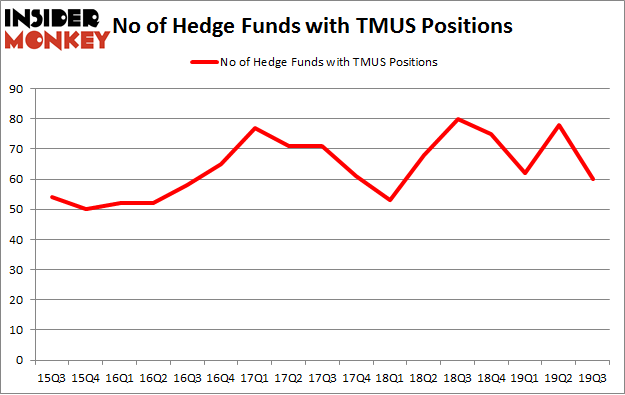 The largest stake in T-Mobile US, Inc. (NYSE:TMUS) was held by Maverick Capital, which reported holding $207.3 million worth of stock at the end of September. It was followed by Citadel Investment Group with a $170.5 million position. Other investors bullish on the company included Glenview Capital, D E Shaw, and NWI Management. In terms of the portfolio weights assigned to each position Tekne Capital Management allocated the biggest weight to T-Mobile US, Inc. (NYSE:TMUS), around 14.16% of its 13F portfolio. Discovery Capital Management is also relatively very bullish on the stock, setting aside 9.11 percent of its 13F equity portfolio to TMUS.

Due to the fact that T-Mobile US, Inc. (NYSE:TMUS) has experienced falling interest from the entirety of the hedge funds we track, it’s safe to say that there exists a select few hedge funds that decided to sell off their positions entirely in the third quarter. Interestingly, Robert Boucai’s Newbrook Capital Advisors dropped the largest position of the “upper crust” of funds watched by Insider Monkey, totaling an estimated $48.1 million in stock, and Matthew Mark’s Jet Capital Investors was right behind this move, as the fund cut about $27.9 million worth. These moves are interesting, as total hedge fund interest was cut by 3 funds in the third quarter.

As you can see these stocks had an average of 39.25 hedge funds with bullish positions and the average amount invested in these stocks was $1648 million. That figure was $1397 million in TMUS’s case. S&P Global Inc. (NYSE:SPGI) is the most popular stock in this table. On the other hand Equinor ASA (NYSE:EQNR) is the least popular one with only 14 bullish hedge fund positions. T-Mobile US, Inc. (NYSE:TMUS) is not the most popular stock in this group but hedge fund interest is still above average. Our calculations showed that top 20 most popular stocks among hedge funds returned 41.3% in 2019 and outperformed the S&P 500 ETF (SPY) by 10.1 percentage points. These stocks also gained 0.1% in 2020 through March 2nd and beat the market by 4.1 percentage points. Hedge funds were also right about betting on TMUS as the stock returned 19% during the first quarter (through March 2nd) and outperformed the market. Hedge funds were rewarded for their relative bullishness.