It was a rough fourth quarter for many hedge funds, which were naturally unable to overcome the big dip in the broad market, as the S&P 500 fell by about 7% during October and average hedge fund losing about 3%. The Russell 2000, composed of smaller companies, performed even worse, trailing the S&P by about 4 percentage points during the first half of Q4, as investors fled less-known quantities for safe havens. This was the case with hedge funds, who we heard were pulling money from the market amid the volatility, which included money from small-cap stocks, which they invest in at a higher rate than other investors. This action contributed to the greater decline in these stocks during the tumultuous period. We will study how this market volatility affected their sentiment towards T-Mobile US, Inc. (NYSE:TMUS) during the quarter below.

In the eyes of most stock holders, hedge funds are assumed to be underperforming, old financial vehicles of the past. While there are over 8000 funds with their doors open at present, We look at the crème de la crème of this group, about 700 funds. These money managers oversee the lion’s share of all hedge funds’ total capital, and by tailing their highest performing investments, Insider Monkey has formulated various investment strategies that have historically exceeded the market. Insider Monkey’s flagship hedge fund strategy outrun the S&P 500 index by 6 percentage points a year since its inception in May 2014 through early November 2018. We were able to generate large returns even by identifying short candidates. Our portfolio of short stocks lost 26.1% since February 2017 even though the market was up nearly 19% during the same period. We just shared a list of 11 short targets in our latest quarterly update.

At Q3’s end, a total of 80 of the hedge funds tracked by Insider Monkey were bullish on this stock, a change of 18% from one quarter earlier. On the other hand, there were a total of 61 hedge funds with a bullish position in TMUS at the beginning of this year. The number of hedge funds with TMUS bets increased by about 50% over the last 6 months. With hedgies’ sentiment swirling, there exists an “upper tier” of notable hedge fund managers who were increasing their stakes significantly (or already accumulated large positions). 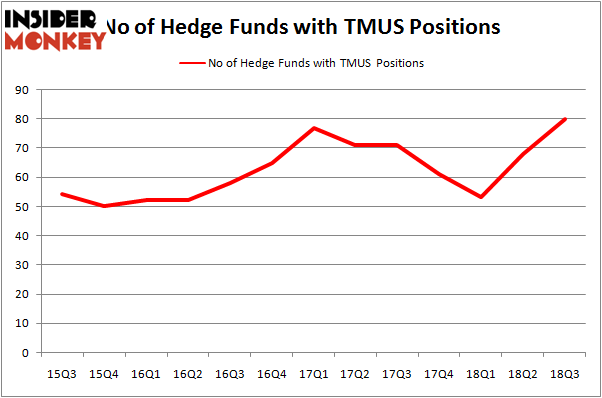 Among these funds, Citadel Investment Group held the most valuable stake in T-Mobile US, Inc. (NYSE:TMUS), which was worth $428.3 million at the end of the third quarter. On the second spot was Maverick Capital which amassed $363.8 million worth of shares. Moreover, Tybourne Capital Management, D E Shaw, and OZ Management were also bullish on T-Mobile US, Inc. (NYSE:TMUS), allocating a large percentage of their portfolios to this stock.

As you can see these stocks had an average of 31.25 hedge funds with bullish positions and the average amount invested in these stocks was $1732 million. That figure was $4330 million in TMUS’s case. Intuit Inc. (NASDAQ:INTU) is the most popular stock in this table. On the other hand UBS Group AG (NYSE:UBS) is the least popular one with only 14 bullish hedge fund positions. Compared to these stocks T-Mobile US, Inc. (NYSE:TMUS) is way more popular among hedge funds. Considering that hedge funds are fond of this stock in relation to its market cap peers, it may be a good idea to analyze it in detail and potentially include it in your portfolio.

Hedge Funds Keep Dumping Platform Specialty Products Corp (PAH); Bill Ackman...
Monthly Newsletter Strategy
Download a free copy of our newsletter and see the details inside!
Hedge Fund Resource Center
Related News
Is T MOBILE US INC (NYSE:TMUS) A Good Stock To Buy? Investors Are Clamoring for T-Mobile US Inc (TMUS) Should You Follow Discovery Capital’s Lead and Reduce Exposure To Sprint (S), T MOBILE (TMUS) & Two Other Stocks? NWI Management Was Right About Apple Inc. (AAPL), Petroleo Brasileiro Petrobras SA (ADR) (PBR), More 5 Stocks That Are Benefiting Greatly From Pokemon Go Are Hedge Funds Right To Be Bearish On T MOBILE US INC (TMUS)? Here’s Why the Market Is Overreacting to T-Mobile Hack and How You Could Win if You Go Against the Flow 5 Ways You Can Eliminate Credit Card Debt 10 Easiest Road Test Sites in NY and NJ 10 Hottest Selling Products in the USA in 2018
Billionaire Hedge Funds