In October the Russell 2000 ETF (IWM) lagged the larger S&P 500 ETF (SPY) by about 4 percentage points as investors worried over the possible ramifications of rising interest rates. The hedge funds and institutional investors we track typically invest more in smaller-cap stocks than an average investor (i.e. only 298 S&P 500 constituents were among the 500 most popular stocks among hedge funds), and we have seen data that shows those funds paring back their overall exposure. Those funds cutting positions in small-caps is one reason why volatility has increased. In the following paragraphs, we take a closer look at what hedge funds and prominent investors think of T MOBILE US INC (NYSE:TMUS) and see how the stock is affected by the recent hedge fund activity. This is a stock that’s owned by billionaires George Soros, David Tepper, and Steve Cohen.

In the 21st century investor’s toolkit there are dozens of formulas market participants can use to size up publicly traded companies. Two of the most under-the-radar formulas are hedge fund and insider trading interest. Our experts have shown that, historically, those who follow the best picks of the elite hedge fund managers can outclass their index-focused peers by a superb amount. Insider Monkey’s flagship best performing hedge funds strategy returned 17.4% year to date and outperformed the market by more than 14 percentage points this year. This strategy also outperformed the market by 3 percentage points in the fourth quarter despite the market volatility (see the details here).

How have hedgies been trading T MOBILE US INC (NYSE:TMUS)?

At the end of the third quarter, a total of 68 of the hedge funds tracked by Insider Monkey held long positions in this stock, a change of 28% from one quarter earlier. By comparison, 60 hedge funds held shares or bullish call options in TMUS heading into this year. With hedge funds’ sentiment swirling, there exists an “upper tier” of noteworthy hedge fund managers who were boosting their stakes meaningfully (or already accumulated large positions). 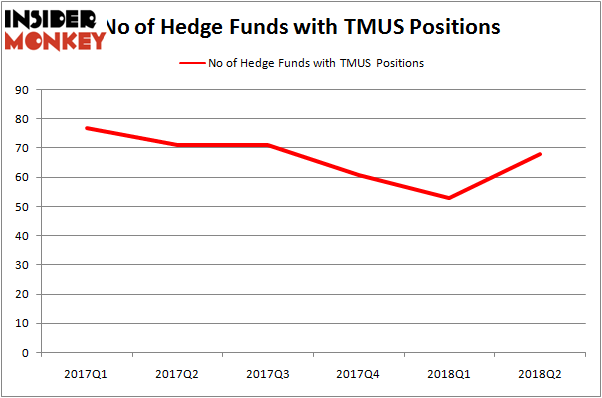 More specifically, Citadel Investment Group was the largest shareholder of T MOBILE US INC (NYSE:TMUS), with a stake worth $470 millions reported as of the end of June. Trailing Citadel Investment Group was Maverick Capital, which amassed a stake valued at $307 millions. Tybourne Capital Management, Tekne Capital Management, and Kamunting Street Capital were also very fond of the stock, giving the stock large weights in their portfolios.

As you can see these stocks had an average of 24 hedge funds with bullish positions and the average amount invested in these stocks was $974 million. That figure was $3751 million in TMUS’s case. American International Group Inc (NYSE:AIG) is the most popular stock in this table. On the other hand Bank of Montreal (USA) (NYSE:BMO) is the least popular one with only 13 bullish hedge fund positions. Compared to these stocks T MOBILE US INC (NYSE:TMUS) is more popular among hedge funds. Considering that hedge funds are fond of this stock in relation to its market cap peers, it may be a good idea to analyze it in detail and potentially include it in your portfolio.

Trade War Casualty or Hugely Undervalued Stock?
Monthly Newsletter Strategy
Download a free copy of our newsletter and see the details inside!
Hedge Fund Resource Center
Related News
Investors Are Clamoring for T-Mobile US Inc (TMUS) Should You Follow Discovery Capital’s Lead and Reduce Exposure To Sprint (S), T MOBILE (TMUS) & Two Other Stocks? NWI Management Was Right About Apple Inc. (AAPL), Petroleo Brasileiro Petrobras SA (ADR) (PBR), More 5 Stocks That Are Benefiting Greatly From Pokemon Go Are Hedge Funds Right To Be Bearish On T MOBILE US INC (TMUS)? Here’s Why the Market Is Overreacting to T-Mobile Hack and How You Could Win if You Go Against the Flow The Smart Money’s Favorite Large-cap Public Utilities Stocks 5 Ways You Can Eliminate Credit Card Debt 10 Easiest Road Test Sites in NY and NJ 10 Hottest Selling Products in the USA in 2018
Billionaire Hedge Funds