Should You Follow Billionaire Ken Fisher Into BHP Billiton (BBL)?

Hedge funds run by legendary names like Nelson Peltz and David Tepper make billions of dollars a year for themselves and their super-rich accredited investors (you’ve got to have a minimum of $1 million liquid to invest in a hedge fund) by spending enormous resources on analyzing and uncovering data about small-cap stocks that the big brokerage houses don’t follow. Small caps are where they can generate significant outperformance. That’s why we pay special attention to hedge fund activity in stocks like BHP Billiton plc (ADR) (NYSE:BBL).

There wasn’t much activity happening in BHP Billiton plc (ADR) (NYSE:BBL) shares during Q2, as hedge fund ownership of the stock remained flat and was off by over 33% during the past five quarters. Hedge funds tracked by Insider Monkey’s database owned just 0.6% of the company’s shares on June 30. After the sale of its shale business is completed for $10.8 billion, BHP Billiton will award shareholders with a special $5.2 billion dividend. The miner ranked 5th on the list of 25 Dividend Stocks that Billionaire Ken Fisher is Bullish On. 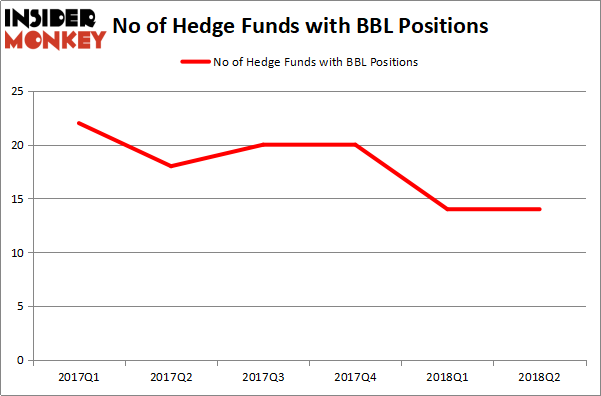 Judging by the fact that BHP Billiton plc (ADR) (NYSE:BBL) has witnessed a decline in interest from the aggregate hedge fund industry, it’s easy to see that there is a sect of funds that decided to sell off their entire stakes heading into Q3. Intriguingly, Jonathan Barrett and Paul Segal’s Luminus Management dumped the biggest position of the 700 funds followed by Insider Monkey, valued at close to $9.4 million in stock. Paul Marshall and Ian Wace’s fund, Marshall Wace LLP, also said goodbye to its stock, about $4 million worth. These moves are intriguing to say the least, as aggregate hedge fund interest stayed the same (this is a bearish signal in our experience).

As you can see these stocks had an average of 45 hedge funds with bullish positions and the average amount invested in these stocks was $3.28 billion. That figure was $726 million in BBL’s case. Adobe Systems Incorporated (NASDAQ:ADBE) is the most popular stock in this table. On the other hand 3M Co (NYSE:MMM) is the least popular one with only 33 bullish hedge fund positions. Compared to these stocks BHP Billiton plc (ADR) (NYSE:BBL) is even less popular than MMM. Considering that hedge funds aren’t fond of this stock in relation to other companies analyzed in this article, it may be a good idea to analyze it in detail and understand why the smart money isn’t behind this stock.