Investing in small-cap stocks has historically been a way to outperform the market, as small-cap companies typically grow faster on average than the blue chips. That outperformance comes with a price, however, as there are occasional periods of higher volatility. The time period since the end of the third quarter is one of those periods, as the Russell 2000 ETF (IWM) has underperformed the larger S&P 500 ETF (SPY) by about 4 percentage points. Given that the funds we track tend to have a disproportionate amount of their portfolios in smaller cap stocks, they have seen some volatility in their portfolios too. Actually their moves are potentially one of the factors that contributed to this volatility. In this article, we use our extensive database of hedge fund holdings to find out what the smart money thinks of Schlumberger Limited. (NYSE:SLB).

Several hedge funds sold out of their positions in Schlumberger Limited. (NYSE:SLB) during Q2, as fears over the state of the shale industry have grown in recent months. Schlumberger CEO Paal Kibsgaard has warned that production estimates for the industry may need to be pulled back, as mature shale areas have proven less bountiful than expected. Schlumberger is one of 25 Dividend Stocks that Billionaire Ken Fisher is Bullish On, owning a $401 million position on September 30. The stock’s dividend yield is closing in on 4% after 36% losses for SLB shares in 2018.

What does the smart money think about Schlumberger Limited. (NYSE:SLB)? 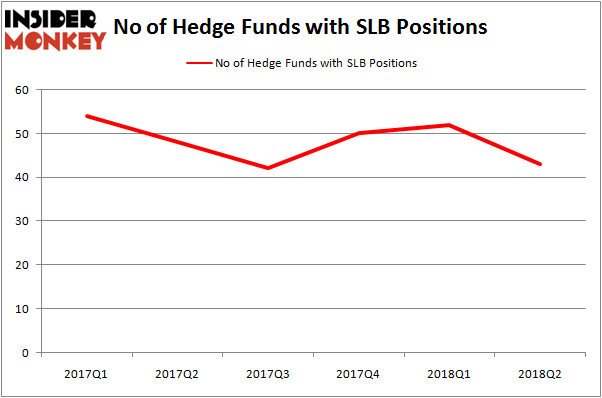 The largest stake in Schlumberger Limited. (NYSE:SLB) was held by Ken Fisher’s Fisher Asset Management, which reported holding $415 million worth of stock as of the end of June. It was followed by Orbis Investment Management with a $197 million position. Other investors bullish on the company included Key Square Capital Management, DC Capital Partners, and International Value Advisers.

Due to the fact that Schlumberger Limited. (NYSE:SLB) has experienced falling interest from hedge fund managers, we can see that there were a few hedgies that slashed their full holdings heading into Q3. Interestingly, Jim Simons’ Renaissance Technologies cut the biggest stake of all the hedgies followed by Insider Monkey, worth an estimated $144 million in call options, and Tim Garry’s Pelorus Jack Capital was right behind this move, as the fund cut about $73.4 million worth. These moves are interesting, as total hedge fund interest fell by 9 funds heading into Q3.

As you can see these stocks had an average of 41 hedge funds with bullish positions and the average amount invested in these stocks was $2.12 billion. That figure was $1.60 billion in SLB’s case. Gilead Sciences, Inc. (NASDAQ:GILD) is the most popular stock in this table. On the other hand Eli Lilly & Co. (NYSE:LLY) is the least popular one with only 33 bullish hedge fund positions. Schlumberger Limited. (NYSE:SLB) is not the most popular stock in this group but hedge fund interest is still above average. This is a slightly positive signal but we’d rather spend our time researching stocks that hedge funds are piling on.