The Insider Monkey team has completed processing the quarterly 13F filings for the June quarter submitted by the hedge funds and other money managers included in our extensive database. Most hedge fund investors endured a torrid quarter, which certainly propelled them to adjust their equity holdings so as to maintain the desired risk profile. As a result, the relevancy of these public filings and their content is indisputable, as they may reveal numerous high-potential stocks. The following article will discuss the smart money sentiment towards Infosys Ltd ADR (NYSE:INFY).

One of Five Indian Stocks Hedge Funds Are Fond of, Infosys Ltd ADR (NYSE:INFY) was owned by 16 of the funds tracked by Insider Monkey’s database as of the end of the second quarter, which was flat quarter-over-quarter. However, the value of hedge funds’ positions fell by over $230 million during Q2, even as shares posted double-digit gains. With its 3.55% dividend yield, Infosys was one of 25 Dividend Stocks that Billionaire Ken Fisher is Bullish On as of September 30.

At the moment there are a lot of metrics stock traders use to appraise publicly traded companies. A pair of the less known metrics are hedge fund and insider trading indicators. Our researchers have shown that, historically, those who follow the top picks of the top investment managers can beat the broader indices by a superb margin (see the details here). 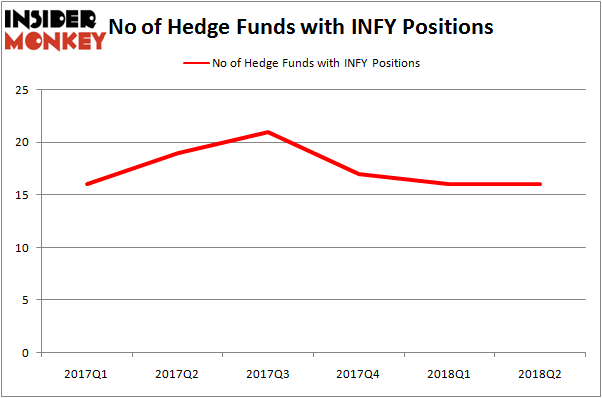 Since Infosys Ltd ADR (NYSE:INFY) has experienced bearish sentiment from the entirety of the hedge funds we track, it’s easy to see that there exists a select few fund managers who sold off their positions entirely by the end of the second quarter. Intriguingly, David Blood and Al Gore’s Generation Investment Management cut the largest investment of all the hedgies tracked by Insider Monkey, valued at close to $342.7 million in stock, and David Kowitz and Sheldon Kasowitz’s Indus Capital was far behind this move, as the fund sold off about $8.2 million worth. These transactions are intriguing to say the least, as aggregate hedge fund interest stayed the same (this is a bearish signal in our experience).

As you can see these stocks had an average of 41 hedge funds with bullish positions and the average amount invested in these stocks was $2.66 billion. That figure was $1.09 billion in INFY’s case. Constellation Brands, Inc. (NYSE:STZ) is the most popular stock in this table. On the other hand Marsh & McLennan Companies, Inc. (NYSE:MMC) is the least popular one with only 22 bullish hedge fund positions. Compared to these stocks Infosys Ltd ADR (NYSE:INFY) is even less popular than MMC. Considering that hedge funds aren’t fond of this stock in relation to other companies analyzed in this article, it may be a good idea to analyze it in detail and understand why the smart money isn’t behind this stock.