Looking for stocks with high upside potential? Just follow the big players within the hedge fund industry. Why should you do so? Let’s take a brief look at what statistics have to say about hedge funds’ stock picking abilities to illustrate. The Standard and Poor’s 500 Index returned approximately 5.7% in the 12 months ending October 26 (including dividend payments). Conversely, hedge funds’ 30 preferred S&P 500 stocks (as of June 2014) generated a return of 15.1% during the same 12-month period, with 53% of these stock picks outperforming the broader market benchmark. Coincidence? It might happen to be so, but it is unlikely. Our research covering the last 18 years indicates that hedge funds’ stock picks generate superior risk-adjusted returns. That’s why we believe it is wise to check hedge fund activity before you invest your time or your savings on a stock like Anheuser-Busch InBev NV (ADR) (NYSE:BUD).

There was a 30% decline in the number of hedge fund shareholders of Anheuser-Busch InBev NV (ADR) (NYSE:BUD) during Q2, as several headwinds are buffeting the stock at the same time, weighing down investor sentiment. The brewer is one of several companies that’s been hurt by Trump’s Steel and Aluminum Tariffs, with shares falling by over 30% this year. A strong U.S dollar has negatively impacted results, while the company was also forced to cut its dividend in half earlier this year as it focuses on paying down its $100 billion in debt. Despite the dividend cut, it ranked third on our list of 25 Dividend Stocks that Billionaire Ken Fisher is Bullish On.

To the average investor there are a multitude of indicators market participants put to use to value their holdings. Two of the most innovative indicators are hedge fund and insider trading activity. Our experts have shown that, historically, those who follow the best picks of the top fund managers can outperform their index-focused peers by a solid amount (see the details here).

What have hedge funds been doing with Anheuser-Busch InBev NV (ADR) (NYSE:BUD)? 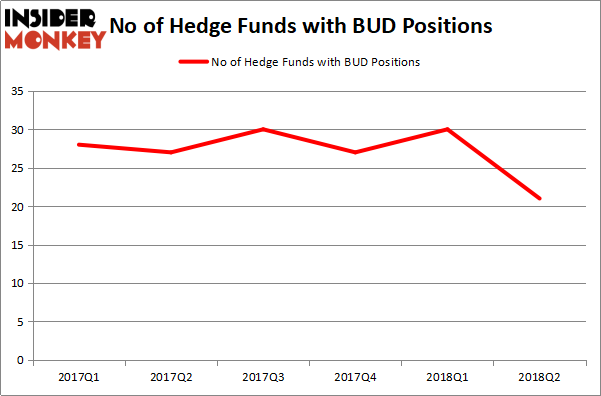 Among these funds, Soroban Capital Partners held the most valuable stake in Anheuser-Busch InBev NV (ADR) (NYSE:BUD), which was worth $856.5 million at the end of the second quarter. On the second spot was Gardner Russo & Gardner which amassed $813.2 million worth of shares. Moreover, Pittencrieff Partners – Gabalex Capital, Beech Hill Partners, and Hoplite Capital Management were also bullish on Anheuser-Busch InBev NV (ADR) (NYSE:BUD), allocating a large percentage of their portfolios to this stock.

Judging by the fact that Anheuser-Busch InBev NV (ADR) (NYSE:BUD) has experienced a decline in interest from hedge fund managers, it’s easy to see that there exists a select few funds that slashed their full holdings by the end of the second quarter. Intriguingly, Peter Rathjens, Bruce Clarke and John Campbell’s Arrowstreet Capital cut about $226.9 million worth of BUD shares, one of several funds to sell out of the stock, which had 9 fewer shareholders by the end of Q2.

Let’s go over hedge fund activity in other stocks – not necessarily in the same industry as Anheuser-Busch InBev NV (ADR) (NYSE:BUD) but similarly valued. We will take a look at TOTAL S.A. (ADR) (NYSE:TOT), The Walt Disney Company (NYSE:DIS), PepsiCo, Inc. (NYSE:PEP), and Unilever N.V. (ADR) (NYSE:UN). This group of stocks’ market valuations are similar to BUD’s market valuation.

As you can see these stocks had an average of 31 hedge funds with bullish positions and the average amount invested in these stocks was $2.27 billion. That figure was $2.19 billion in BUD’s case. The Walt Disney Company (NYSE:DIS) is the most popular stock in this table. On the other hand TOTAL S.A. (ADR) (NYSE:TOT) is the least popular one with only 13 bullish hedge fund positions. Anheuser-Busch InBev NV (ADR) (NYSE:BUD) is not the least popular stock in this group but hedge fund interest is still below average. This is a slightly negative signal and we’d rather spend our time researching stocks that hedge funds are piling on.