Hedge funds are known to underperform the bull markets but that’s not because they are bad at investing. Truth be told, most hedge fund managers and other smaller players within this industry are very smart and skilled investors. Of course, they may also make wrong bets in some instances, but no one knows what the future holds and how market participants will react to the bountiful news that floods in each day. Hedge funds underperform because they are hedged. The Standard and Poor’s 500 Index returned approximately 13.1% in the first 2.5 months of this year (including dividend payments). Conversely, hedge funds’ top 15 large-cap stock picks generated a return of 19.7% during the same 2.5-month period, with 93% of these stock picks outperforming the broader market benchmark. An average long/short hedge fund returned only 5% due to the hedges they implement and the large fees they charge. Our research covering the last 18 years indicates that investors can outperform the market by imitating hedge funds’ stock picks rather than directly investing in hedge funds. That’s why we believe it isn’t a waste of time to check out hedge fund sentiment before you invest in a stock like China Unicom (Hong Kong) Limited (NYSE:CHU).

Is China Unicom (Hong Kong) Limited (NYSE:CHU) a buy here? Hedge funds are taking an optimistic view. The number of long hedge fund positions improved by 3 recently. Our calculations also showed that CHU isn’t among the 30 most popular stocks among hedge funds. CHU was in 9 hedge funds’ portfolios at the end of December. There were 6 hedge funds in our database with CHU positions at the end of the previous quarter.

At the end of the fourth quarter, a total of 9 of the hedge funds tracked by Insider Monkey were long this stock, a change of 50% from one quarter earlier. Below, you can check out the change in hedge fund sentiment towards CHU over the last 14 quarters. So, let’s examine which hedge funds were among the top holders of the stock and which hedge funds were making big moves. 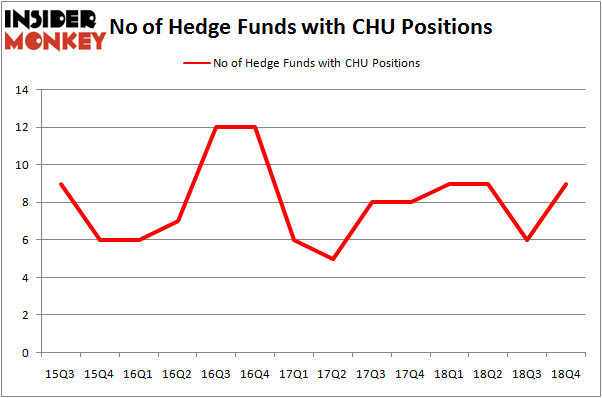 More specifically, Arrowstreet Capital was the largest shareholder of China Unicom (Hong Kong) Limited (NYSE:CHU), with a stake worth $27.4 million reported as of the end of September. Trailing Arrowstreet Capital was Renaissance Technologies, which amassed a stake valued at $26.2 million. Millennium Management, Moon Capital, and Two Sigma Advisors were also very fond of the stock, giving the stock large weights in their portfolios.

With a general bullishness amongst the heavyweights, specific money managers were breaking ground themselves. Moon Capital, managed by John W. Moon, created the largest position in China Unicom (Hong Kong) Limited (NYSE:CHU). Moon Capital had $0.9 million invested in the company at the end of the quarter. Minhua Zhang’s Weld Capital Management also made a $0.7 million investment in the stock during the quarter. The other funds with new positions in the stock are David Costen Haley’s HBK Investments and Matthew Tewksbury’s Stevens Capital Management.

As you can see these stocks had an average of 21.5 hedge funds with bullish positions and the average amount invested in these stocks was $940 million. That figure was $61 million in CHU’s case. SYSCO Corporation (NYSE:SYY) is the most popular stock in this table. On the other hand National Grid plc (NYSE:NGG) is the least popular one with only 10 bullish hedge fund positions. Compared to these stocks China Unicom (Hong Kong) Limited (NYSE:CHU) is even less popular than NGG. Our calculations showed that top 15 most popular stocks among hedge funds returned 19.7% through March 15th and outperformed the S&P 500 ETF (SPY) by 6.6 percentage points. Hedge funds were also right about betting on CHU as the stock returned 20.5% and outperformed the market as well.

Is Illinois Tool Works Inc. (ITW) A Good Stock To Buy?
Monthly Newsletter Strategy
Download a free copy of our newsletter and see the details inside!
Hedge Fund Resource Center
Related News
Hedge Funds Are Selling China Unicom (Hong Kong) Limited (CHU) Should You Buy China Unicom (Hong Kong) Limited (ADR) (CHU)? 11 Most Expensive Countries in Asia 25 Countries That Spend The Most On Food: US Isn’t One Of ‘Em 20 Most Expensive Cities to Live in The World in 2015 11 Most Expensive Countries to Buy Milk 11 Countries with Highest Atheist Population Ten of the Most Common Addictions 13 African Countries with the Largest White Population in 2018 6 Causes of Human Trafficking in Africa, India, and US
Billionaire Hedge Funds