Hedge fund managers like David Einhorn, Bill Ackman, or Carl Icahn became billionaires through reaping large profits for their investors, which is why piggybacking their stock picks may provide us with significant returns as well. Many hedge funds, like Paul Singer’s Elliott Management, are pretty secretive, but we can still get some insights by analyzing their quarterly 13F filings. One of the most fertile grounds for large abnormal returns is hedge funds’ most popular small-cap picks, which are not so widely followed and often trade at a discount to their intrinsic value. In this article we will check out hedge fund activity in another small-cap stock: Automatic Data Processing, Inc. (NASDAQ:ADP).

Automatic Data Processing, Inc. (NASDAQ:ADP) has experienced an increase in hedge fund interest recently. Our calculations also showed that ADP isn’t among the 30 most popular stocks among hedge funds.

According to most shareholders, hedge funds are seen as underperforming, outdated financial tools of years past. While there are over 8000 funds in operation today, We look at the elite of this group, around 750 funds. Most estimates calculate that this group of people orchestrate the majority of the smart money’s total asset base, and by observing their first-class equity investments, Insider Monkey has discovered numerous investment strategies that have historically defeated the market. Insider Monkey’s flagship hedge fund strategy outstripped the S&P 500 index by around 5 percentage points annually since its inception in May 2014. We were able to generate large returns even by identifying short candidates. Our portfolio of short stocks lost 25.7% since February 2017 (through September 30th) even though the market was up more than 33% during the same period. We just shared a list of 10 short targets in our latest quarterly update .

What have hedge funds been doing with Automatic Data Processing, Inc. (NASDAQ:ADP)?

At the end of the second quarter, a total of 43 of the hedge funds tracked by Insider Monkey held long positions in this stock, a change of 10% from one quarter earlier. The graph below displays the number of hedge funds with bullish position in ADP over the last 16 quarters. With hedgies’ positions undergoing their usual ebb and flow, there exists an “upper tier” of noteworthy hedge fund managers who were adding to their holdings meaningfully (or already accumulated large positions). 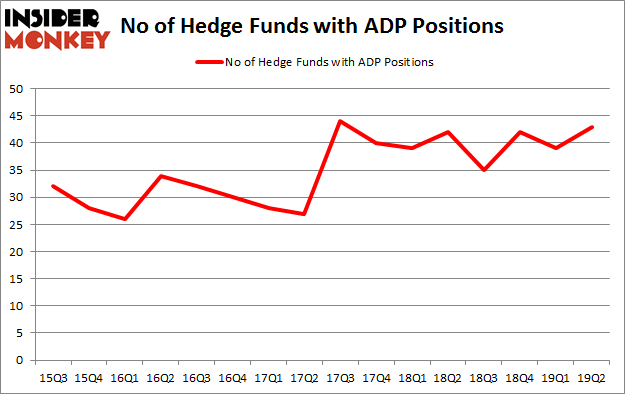 When looking at the institutional investors followed by Insider Monkey, Bill Ackman’s Pershing Square has the number one position in Automatic Data Processing, Inc. (NASDAQ:ADP), worth close to $666.2 million, corresponding to 9.9% of its total 13F portfolio. Unfortunately, Ackman sold out of the stock during the third quarter according to an investor letter seen by Insider Monkey. The second largest stake is held by Cedar Rock Capital, managed by Andy Brown, which holds a $510.8 million position; 12.1% of its 13F portfolio is allocated to the company. Other members of the smart money that hold long positions contain Peter Rathjens, Bruce Clarke and John Campbell’s Arrowstreet Capital, David Blood and Al Gore’s Generation Investment Management and D E Shaw.

Consequently, key hedge funds were leading the bulls’ herd. Renaissance Technologies assembled the largest position in Automatic Data Processing, Inc. (NASDAQ:ADP). Renaissance Technologies had $26.2 million invested in the company at the end of the quarter. Benjamin A. Smith’s Laurion Capital Management also made a $12.3 million investment in the stock during the quarter. The other funds with new positions in the stock are Richard Chilton’s Chilton Investment Company, Michael Hintze’s CQS Cayman LP, and Matthew Tewksbury’s Stevens Capital Management.

Let’s now take a look at hedge fund activity in other stocks – not necessarily in the same industry as Automatic Data Processing, Inc. (NASDAQ:ADP) but similarly valued. We will take a look at VMware, Inc. (NYSE:VMW), Intuit Inc. (NASDAQ:INTU), Becton, Dickinson and Company (NYSE:BDX), and Vale SA (NYSE:VALE). This group of stocks’ market caps are similar to ADP’s market cap.

As you can see these stocks had an average of 35.25 hedge funds with bullish positions and the average amount invested in these stocks was $1658 million. That figure was $2737 million in ADP’s case. Intuit Inc. (NASDAQ:INTU) is the most popular stock in this table. On the other hand Vale SA (NYSE:VALE) is the least popular one with only 21 bullish hedge fund positions. Automatic Data Processing, Inc. (NASDAQ:ADP) is not the most popular stock in this group but hedge fund interest is still above average. This is a slightly positive signal but we’d rather spend our time researching stocks that hedge funds are piling on. Our calculations showed that top 20 most popular stocks among hedge funds returned 24.4% in 2019 through September 30th and outperformed the S&P 500 ETF (SPY) by 4 percentage points. Unfortunately ADP wasn’t nearly as popular as these 20 stocks and hedge funds that were betting on ADP were disappointed as the stock returned -1.9% during the third quarter and underperformed the market. If you are interested in investing in large cap stocks with huge upside potential, you should check out the top 20 most popular stocks among hedge funds as many of these stocks already outperformed the market so far this year.