Should You Avoid FLIR Systems, Inc. (FLIR) Like Hedge Funds Did?

A whopping number of 13F filings filed with U.S. Securities and Exchange Commission has been processed by Insider Monkey so that individual investors can look at the overall hedge fund sentiment towards the stocks included in their watchlists. These freshly-submitted public filings disclose money managers’ equity positions as of the end of the three-month period that ended June 28, so let’s proceed with the discussion of the hedge fund sentiment on FLIR Systems, Inc. (NASDAQ:FLIR).

Is FLIR Systems, Inc. (NASDAQ:FLIR) an attractive investment right now? Prominent investors are turning less bullish. The number of bullish hedge fund positions decreased by 12 lately. Our calculations also showed that FLIR isn’t among the 30 most popular stocks among hedge funds (see the video below).

In the financial world there are tons of methods market participants put to use to value publicly traded companies. A pair of the most innovative methods are hedge fund and insider trading signals. We have shown that, historically, those who follow the top picks of the elite investment managers can beat the market by a very impressive margin (see the details here). 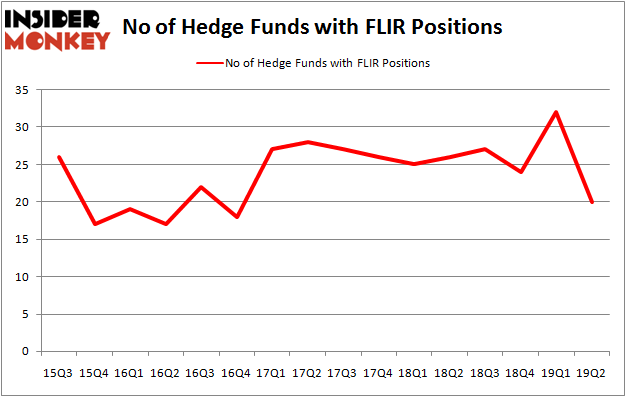 Unlike this former hedge fund manager who is convinced Dow will soar past 40000, our long-short investment strategy doesn’t rely on bull markets to deliver double digit returns. We only rely on hedge fund buy/sell signals. We’re going to check out the recent hedge fund action surrounding FLIR Systems, Inc. (NASDAQ:FLIR).

What have hedge funds been doing with FLIR Systems, Inc. (NASDAQ:FLIR)?

At Q2’s end, a total of 20 of the hedge funds tracked by Insider Monkey held long positions in this stock, a change of -38% from the first quarter of 2019. Below, you can check out the change in hedge fund sentiment towards FLIR over the last 16 quarters. With hedge funds’ positions undergoing their usual ebb and flow, there exists a select group of key hedge fund managers who were adding to their stakes meaningfully (or already accumulated large positions).

More specifically, Royce & Associates was the largest shareholder of FLIR Systems, Inc. (NASDAQ:FLIR), with a stake worth $81.3 million reported as of the end of March. Trailing Royce & Associates was Alyeska Investment Group, which amassed a stake valued at $81.2 million. D E Shaw, Arrowstreet Capital, and AQR Capital Management were also very fond of the stock, giving the stock large weights in their portfolios.

Due to the fact that FLIR Systems, Inc. (NASDAQ:FLIR) has faced a decline in interest from the entirety of the hedge funds we track, logic holds that there exists a select few hedge funds that decided to sell off their positions entirely last quarter. Interestingly, Paul Marshall and Ian Wace’s Marshall Wace LLP dropped the largest position of all the hedgies tracked by Insider Monkey, valued at an estimated $19.9 million in stock. Andrew Feldstein and Stephen Siderow’s fund, Blue Mountain Capital, also dropped its stock, about $13.3 million worth. These moves are important to note, as aggregate hedge fund interest fell by 12 funds last quarter.

As you can see these stocks had an average of 22.75 hedge funds with bullish positions and the average amount invested in these stocks was $775 million. That figure was $435 million in FLIR’s case. Amarin Corporation plc (NASDAQ:AMRN) is the most popular stock in this table. On the other hand CAE, Inc. (NYSE:CAE) is the least popular one with only 10 bullish hedge fund positions. FLIR Systems, Inc. (NASDAQ:FLIR) is not the least popular stock in this group but hedge fund interest is still below average. This is a slightly negative signal and we’d rather spend our time researching stocks that hedge funds are piling on. Our calculations showed that top 20 most popular stocks among hedge funds returned 24.4% in 2019 through September 30th and outperformed the S&P 500 ETF (SPY) by 4 percentage points. Unfortunately FLIR wasn’t nearly as popular as these 20 stocks (hedge fund sentiment was quite bearish); FLIR investors were disappointed as the stock returned -2.4% during the third quarter and underperformed the market. If you are interested in investing in large cap stocks with huge upside potential, you should check out the top 20 most popular stocks among hedge funds as many of these stocks already outperformed the market so far in 2019.