PPL Corporation (PPL): Are Hedge Funds Right About This Stock?

We can judge whether PPL Corporation (NYSE:PPL) is a good investment right now by following the lead of some of the best investors in the world and piggybacking their ideas. There’s no better way to get these firms’ immense resources and analytical capabilities working for us than to follow their lead into their best ideas. While not all of these picks will be winners, research shows that these picks historically outperformed the market when we factor in known risk factors.

PPL Corporation (NYSE:PPL) shares haven’t seen a lot of action during the third quarter. Overall, hedge fund sentiment was unchanged. The stock was in 24 hedge funds’ portfolios at the end of the third quarter of 2018. At the end of this article we will also compare PPL to other stocks including Devon Energy Corp (NYSE:DVN), Xilinx, Inc. (NASDAQ:XLNX), and Energy Transfer Equity, L.P. (NYSE:ETE) to get a better sense of its popularity.

At Q3’s end, a total of 24 of the hedge funds tracked by Insider Monkey were bullish on this stock, no change from the previous quarter. The graph below displays the number of hedge funds with bullish position in PPL over the last 13 quarters. With hedge funds’ capital changing hands, there exists an “upper tier” of key hedge fund managers who were upping their stakes significantly (or already accumulated large positions). 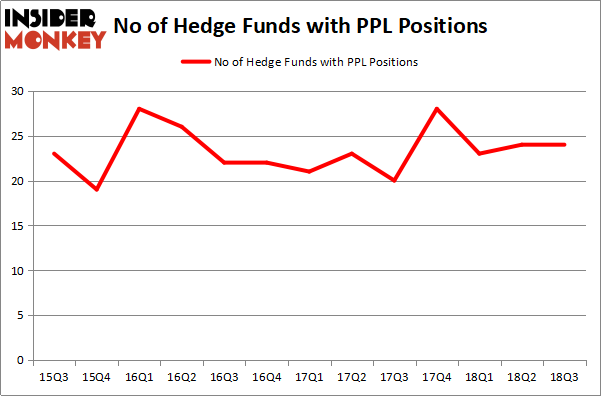 The largest stake in PPL Corporation (NYSE:PPL) was held by Zimmer Partners, which reported holding $659.3 million worth of stock at the end of September. It was followed by Millennium Management with a $92.2 million position. Other investors bullish on the company included Luminus Management, Citadel Investment Group, and Blackstart Capital.

Seeing as PPL Corporation (NYSE:PPL) has witnessed bearish sentiment from the smart money, it’s easy to see that there exists a select few fund managers that slashed their positions entirely in the third quarter. It’s worth mentioning that Zach Schreiber’s Point State Capital said goodbye to the largest investment of the 700 funds tracked by Insider Monkey, valued at about $49.6 million in stock, and Josh Donfeld and David Rogers’s Castle Hook Partners was right behind this move, as the fund cut about $20.2 million worth. These moves are interesting, as aggregate hedge fund interest stayed the same (this is a bearish signal in our experience).

As you can see these stocks had an average of 31.75 hedge funds with bullish positions and the average amount invested in these stocks was $1.31 billion. That figure was $937 million in PPL’s case. Devon Energy Corp (NYSE:DVN) is the most popular stock in this table. On the other hand Energy Transfer Equity, L.P. (NYSE:ETE) is the least popular one with only 22 bullish hedge fund positions. PPL Corporation (NYSE:PPL) is not the least popular stock in this group but hedge fund interest is still below average. This is a slightly negative signal and we’d rather spend our time researching stocks that hedge funds are piling on. In this regard DVN might be a better candidate to consider a long position.