The Chinese calendar says 2013 is the year of the snake, but the market says it’s the year of biotech. Major biotechnology ETFs and indices have walloped the broader market by more than 25% since the beginning of the year. 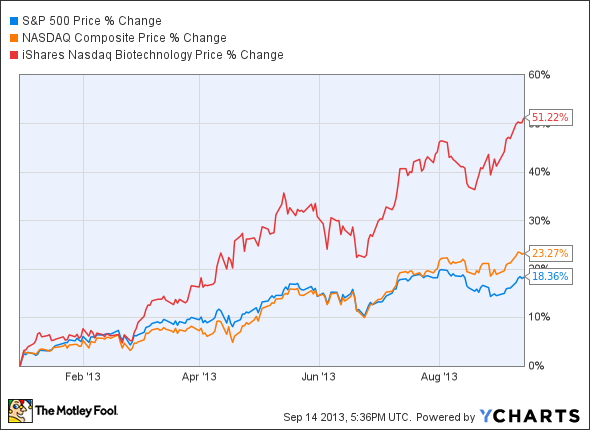 What’s fueling the madness? Maturing pipelines, promising late-stage studies, a growing number of IPOs, and, of course, acquisitions. Larger companies looking to replace falling stars in their product portfolios or put their large cash holdings to better use can opt to gobble up a promising firm to inject some optimism into operations for shareholders. We’re only three-quarters of the way through 2013, but there have already been several transactions that will have far-reaching implications on the future of the industry.

Acquisition No. 3: Omthera Pharmaceuticals Inc (NASDAQ:OMTH)
In May, AstraZeneca plc (ADR) (NYSE:AZN) bought Omthera for $443 million. AstraZeneca is being hit hard this year by generic competition in various markets to Seroquel, Atacand, and Crestor, so jittery investors are right to worry. After recording total sales of $33.6 billion in 2011, the company notched just $28 billion last year — and will generate even less this year. Acquiring Omthera gives the company Epanova, a novel fish-oil pill that was shown to lower very high triglycerides and non-HDL cholesterol in combination with a statin, such as Crestor.

If a large-scale cardiovascular trial being planned proves effective in lowering risk of heart attack, AstraZeneca plc (ADR) (NYSE:AZN) could begin wrestling market share away from Lovaza from GlaxoSmithKline plc (ADR) (NYSE:GSK) and represent another obstacle for Vascepa from Amarin Corporation plc (ADR) (NASDAQ:AMRN). Things look promising so far. A 2-gram dose of Epanova has been shown to be comparable to a 4-gram dose of Lovaza.

It may not be that easy, however. There is now a clear path forward for generic versions of Lovaza, which achieved peak sales of more than $1 billion. That could mean trouble for Amarin’s Vascepa, which generated sales of just $7.8 million in the first half of this year, and newcomer Epanova. Moreover, several recent studies seem to have found holes in the ability of fatty acid supplements to provide health benefits. Some have even found that the supplements increase the risk of prostate cancer. Will generic competition and new scientific evidence be too much for Epanova to overcome?

Acquisition No. 2: Elan Corporation, plc (ADR) (NYSE:ELN)
In July, Perrigo Company (NYSE:PRGO) bought Elan for $8.6 billion. While the deal gives Perrigo a big tax advantage each year — Elan Corporation, plc (ADR) (NYSE:ELN) is based in tax-friendly Ireland — it could also allow the generic-drug maker to expand internationally and even further into biotech. Elan developed Tysabri for treating multiple sclerosis before selling its rights to Biogen Idec Inc. (NASDAQ:BIIB) earlier this year for $3.25 billion plus royalties of hundreds of millions of dollars per year. Throw in an estimated $150 million in annual tax savings, and Perrigo shareholders could be looking at more than half a billion dollars in extra cash each year for growth initiatives at peak royalties.

The extra loot represents more than 14% of Perrigo Company (NYSE:PRGO)’s fiscal year 2013 revenue. Unfortunately, outside of tax savings and Tysabri royalties, there are no revenue-generating assets at Elan Corporation, plc (ADR) (NYSE:ELN). That makes the nearly $9 billion deal for just $500 million in annual revenue — and that’s if Tysabri sales continue to ramp — questionable at best. Such a scenario would represent a 5.8% annual return on the acquisition price, but that puts a lot of faith in Biogen Idec Inc. (NASDAQ:BIIB)’s ability to increase its market share. The likelihood of that occurrence could be why investors sent shares of Perrigo down 7% when the deal was announced. However, assuming Perrigo uses Ireland as a stepping stone for further international expansion, the deal could end up being the most important business decision in the company’s history.