Is Webster Financial Corporation (WBS) A Good Stock To Buy?

Russell 2000 ETF (IWM) lagged the larger S&P 500 ETF (SPY) by more than 10 percentage points since the end of the third quarter of 2018 as investors first worried over the possible ramifications of rising interest rates and the escalation of the trade war with China. The hedge funds and institutional investors we track typically invest more in smaller-cap stocks than an average investor (i.e. only about 60% S&P 500 constituents were among the 500 most popular stocks among hedge funds), and we have seen data that shows those funds paring back their overall exposure. Those funds cutting positions in small-caps is one reason why volatility has increased. In the following paragraphs, we take a closer look at what hedge funds and prominent investors think of Webster Financial Corporation (NYSE:WBS) and see how the stock is affected by the recent hedge fund activity.

Is Webster Financial Corporation (NYSE:WBS) a buy right now? Investors who are in the know are becoming less hopeful. The number of bullish hedge fund bets shrunk by 3 in recent months. Our calculations also showed that WBS isn’t among the 30 most popular stocks among hedge funds (view the video below). WBS was in 22 hedge funds’ portfolios at the end of the second quarter of 2019. There were 25 hedge funds in our database with WBS holdings at the end of the previous quarter.

Heading into the third quarter of 2019, a total of 22 of the hedge funds tracked by Insider Monkey were bullish on this stock, a change of -12% from the previous quarter. On the other hand, there were a total of 17 hedge funds with a bullish position in WBS a year ago. With hedgies’ positions undergoing their usual ebb and flow, there exists an “upper tier” of noteworthy hedge fund managers who were increasing their holdings significantly (or already accumulated large positions). 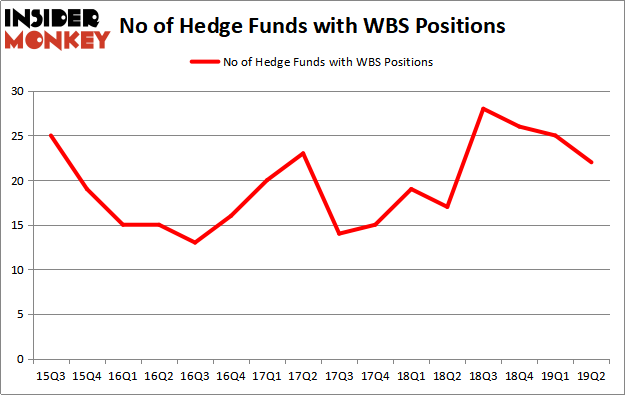 The largest stake in Webster Financial Corporation (NYSE:WBS) was held by Nitorum Capital, which reported holding $79.9 million worth of stock at the end of March. It was followed by Pzena Investment Management with a $58.6 million position. Other investors bullish on the company included Polaris Capital Management, Royce & Associates, and Fisher Asset Management.

Due to the fact that Webster Financial Corporation (NYSE:WBS) has experienced declining sentiment from the aggregate hedge fund industry, we can see that there were a few hedgies that slashed their full holdings heading into Q3. It’s worth mentioning that Mariko Gordon’s Daruma Asset Management dropped the biggest investment of all the hedgies followed by Insider Monkey, valued at close to $2.6 million in stock, and Phil Frohlich’s Prescott Group Capital Management was right behind this move, as the fund dumped about $1.4 million worth. These moves are interesting, as aggregate hedge fund interest was cut by 3 funds heading into Q3.

As you can see these stocks had an average of 20.25 hedge funds with bullish positions and the average amount invested in these stocks was $317 million. That figure was $365 million in WBS’s case. SLM Corp (NASDAQ:SLM) is the most popular stock in this table. On the other hand DCP Midstream LP (NYSE:DCP) is the least popular one with only 2 bullish hedge fund positions. Webster Financial Corporation (NYSE:WBS) is not the most popular stock in this group but hedge fund interest is still above average. This is a slightly positive signal but we’d rather spend our time researching stocks that hedge funds are piling on. Our calculations showed that top 20 most popular stocks among hedge funds returned 24.4% in 2019 through September 30th and outperformed the S&P 500 ETF (SPY) by 4 percentage points. Unfortunately WBS wasn’t nearly as popular as these 20 stocks and hedge funds that were betting on WBS were disappointed as the stock returned -1.1% during the third quarter and underperformed the market. If you are interested in investing in large cap stocks with huge upside potential, you should check out the top 20 most popular stocks among hedge funds as many of these stocks already outperformed the market so far this year.