The government requires hedge funds and wealthy investors that crossed the $100 million equity holdings threshold are required to file a report that shows their positions at the end of every quarter. Even though it isn’t the intention, these filings level the playing field for ordinary investors. The latest round of 13F filings disclosed the funds’ positions on December 31. We at Insider Monkey have made an extensive database of nearly 750 of those elite funds and prominent investors’ filings. In this article, we analyze how these elite funds and prominent investors traded Webster Financial Corporation (NYSE:WBS) based on those filings.

Is Webster Financial Corporation (NYSE:WBS) undervalued? The best stock pickers are becoming less confident. The number of bullish hedge fund bets were trimmed by 2 in recent months. Our calculations also showed that WBS isn’t among the 30 most popular stocks among hedge funds. WBS was in 26 hedge funds’ portfolios at the end of December. There were 28 hedge funds in our database with WBS holdings at the end of the previous quarter.

In today’s marketplace there are many tools market participants can use to analyze publicly traded companies. A duo of the most under-the-radar tools are hedge fund and insider trading activity. Our researchers have shown that, historically, those who follow the top picks of the top investment managers can outpace the broader indices by a superb amount (see the details here).

What have hedge funds been doing with Webster Financial Corporation (NYSE:WBS)?

At the end of the fourth quarter, a total of 26 of the hedge funds tracked by Insider Monkey were long this stock, a change of -7% from the previous quarter. Below, you can check out the change in hedge fund sentiment towards WBS over the last 14 quarters. So, let’s review which hedge funds were among the top holders of the stock and which hedge funds were making big moves. 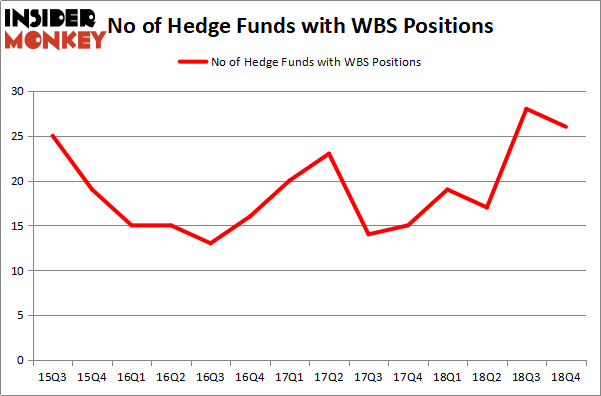 Due to the fact that Webster Financial Corporation (NYSE:WBS) has witnessed a decline in interest from the entirety of the hedge funds we track, logic holds that there were a few money managers who were dropping their entire stakes last quarter. It’s worth mentioning that Peter Rathjens, Bruce Clarke and John Campbell’s Arrowstreet Capital dropped the biggest position of all the hedgies watched by Insider Monkey, totaling an estimated $3.6 million in stock, and Sander Gerber’s Hudson Bay Capital Management was right behind this move, as the fund dumped about $3.6 million worth. These bearish behaviors are intriguing to say the least, as total hedge fund interest was cut by 2 funds last quarter.