Is Unisys Corporation (UIS) Going To Burn These Hedge Funds ?

The 700+ hedge funds and famous money managers tracked by Insider Monkey have already compiled and submitted their 13F filings for the second quarter, which unveil their equity positions as of June 28. We went through these filings, fixed typos and other more significant errors and identified the changes in hedge fund portfolios. Our extensive review of these public filings is finally over, so this article is set to reveal the smart money sentiment towards Unisys Corporation (NYSE:UIS).

Unisys Corporation (NYSE:UIS) shareholders have witnessed a decrease in hedge fund sentiment of late. Our calculations also showed that UIS isn’t among the 30 most popular stocks among hedge funds (see the video below).

In the eyes of most market participants, hedge funds are seen as underperforming, outdated financial vehicles of years past. While there are greater than 8000 funds with their doors open at present, Our researchers choose to focus on the top tier of this club, approximately 750 funds. These investment experts command the majority of the smart money’s total asset base, and by keeping an eye on their top equity investments, Insider Monkey has spotted many investment strategies that have historically defeated the broader indices. Insider Monkey’s flagship hedge fund strategy surpassed the S&P 500 index by around 5 percentage points a year since its inception in May 2014. We were able to generate large returns even by identifying short candidates. Our portfolio of short stocks lost 25.7% since February 2017 (through September 30th) even though the market was up more than 33% during the same period. We just shared a list of 10 short targets in our latest quarterly update .

Heading into the third quarter of 2019, a total of 16 of the hedge funds tracked by Insider Monkey were bullish on this stock, a change of -16% from the previous quarter. Below, you can check out the change in hedge fund sentiment towards UIS over the last 16 quarters. With hedgies’ positions undergoing their usual ebb and flow, there exists a few noteworthy hedge fund managers who were upping their stakes meaningfully (or already accumulated large positions). 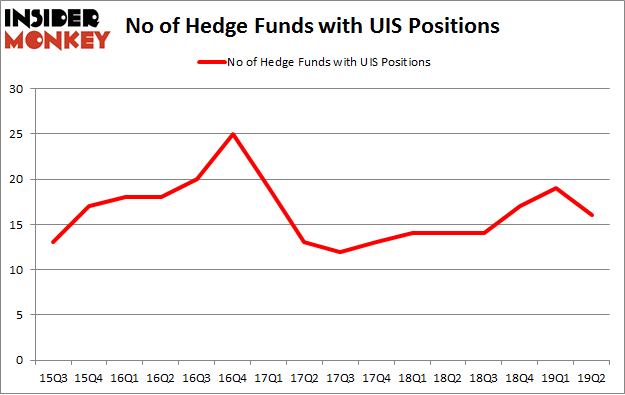 When looking at the institutional investors followed by Insider Monkey, Peter Schliemann’s Rutabaga Capital Management has the most valuable position in Unisys Corporation (NYSE:UIS), worth close to $10.4 million, corresponding to 3% of its total 13F portfolio. On Rutabaga Capital Management’s heels is AQR Capital Management, managed by Cliff Asness, which holds a $8 million position; less than 0.1%% of its 13F portfolio is allocated to the stock. Other peers with similar optimism encompass Chuck Royce’s Royce & Associates, Steve Cohen’s Point72 Asset Management and D. E. Shaw’s D E Shaw.

Judging by the fact that Unisys Corporation (NYSE:UIS) has experienced a decline in interest from the aggregate hedge fund industry, logic holds that there exists a select few hedge funds that elected to cut their full holdings heading into Q3. It’s worth mentioning that Israel Englander’s Millennium Management said goodbye to the biggest stake of all the hedgies watched by Insider Monkey, comprising about $10.4 million in stock, and Peter Rathjens, Bruce Clarke and John Campbell’s Arrowstreet Capital was right behind this move, as the fund said goodbye to about $3.6 million worth. These moves are intriguing to say the least, as aggregate hedge fund interest was cut by 3 funds heading into Q3.

As you can see these stocks had an average of 12.5 hedge funds with bullish positions and the average amount invested in these stocks was $64 million. That figure was $46 million in UIS’s case. Harmonic Inc (NASDAQ:HLIT) is the most popular stock in this table. On the other hand Corenergy Infrastructure Trust Inc (NYSE:CORR) is the least popular one with only 10 bullish hedge fund positions. Compared to these stocks Unisys Corporation (NYSE:UIS) is more popular among hedge funds. Our calculations showed that top 20 most popular stocks among hedge funds returned 24.4% in 2019 through September 30th and outperformed the S&P 500 ETF (SPY) by 4 percentage points. Unfortunately UIS wasn’t nearly as popular as these 20 stocks and hedge funds that were betting on UIS were disappointed as the stock returned -23.6% during the third quarter and underperformed the market. If you are interested in investing in large cap stocks with huge upside potential, you should check out the top 20 most popular stocks among hedge funds as many of these stocks already outperformed the market in Q3.