Should You Buy Unisys Corporation (UIS)?

How do you pick the next stock to invest in? One way would be to spend hours of research browsing through thousands of publicly traded companies. However, an easier way is to look at the stocks that smart money investors are collectively bullish on. Hedge funds and other institutional investors usually invest large amounts of capital and have to conduct due diligence while choosing their next pick. They don’t always get it right, but, on average, their stock picks historically generated strong returns after adjusting for known risk factors. With this in mind, let’s take a look at the recent hedge fund activity surrounding Unisys Corporation (NYSE:UIS).

At the moment there are several signals market participants put to use to analyze their stock investments. Two of the most innovative signals are hedge fund and insider trading indicators. We have shown that, historically, those who follow the best picks of the best money managers can beat the S&P 500 by a healthy margin (see the details here).

While collecting data for our write-up, we came across Miller Value Partners’ third-quarter 2018 letter to shareholders, that gives its opinion on Endo International. The fund has a large position in the company and had this to say in the letter:

“Supervalu along with our holdings in Endo International (ENDP) and Unisys (UIS) were significant positive contributors during the quarter pushing the Deep Value strategies ahead of the S&P 500.”

Our readers will be interested to know that the last major insider purchase of the company’s stock came at the hands of J. Edward Coleman, the former Chairman and Chief Executive Officer at Unisys Corporation, who purchased 4,500 shares of the company at $21.11. The shares are currently trading at $11.76, so the purchase did not work out over time for the executive.

Heading into the fourth quarter of 2018, a total of 14 of the hedge funds tracked by Insider Monkey were long this stock, no change from one quarter earlier. Below, you can check out the change in hedge fund sentiment towards UIS over the last 13 quarters. So, let’s see which hedge funds were among the top holders of the stock and which hedge funds were making big moves. 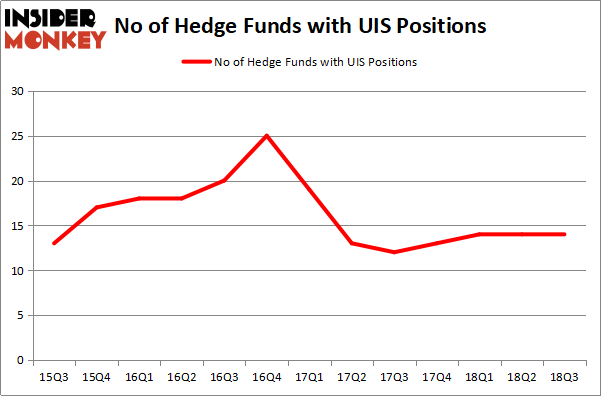 The largest stake in Unisys Corporation (NYSE:UIS) was held by Portolan Capital Management, which reported holding $41.2 million worth of stock at the end of September. It was followed by Royce & Associates with a $34.6 million position. Other investors bullish on the company included Millennium Management, D E Shaw, and Vertex One Asset Management.

Seeing as Unisys Corporation (NYSE:UIS) has experienced a decline in interest from the smart money, it’s safe to say that there lies a certain “tier” of hedge funds that decided to sell off their entire stakes in the third quarter. Intriguingly, Robert Henry Lynch’s Aristeia Capital said goodbye to the biggest position of the “upper crust” of funds followed by Insider Monkey, worth about $6 million in stock, and Mark Broach’s Manatuck Hill Partners was right behind this move, as the fund dumped about $3.8 million worth. These transactions are interesting, as total hedge fund interest stayed the same (this is a bearish signal in our experience).

As you can see these stocks had an average of 15.25 hedge funds with bullish positions and the average amount invested in these stocks was $106 million. That figure was $180 million in UIS’s case. AdvanSix Inc. (NYSE:ASIX) is the most popular stock in this table. On the other hand, 0 is the least popular one with only 12 bullish hedge fund positions. Unisys Corporation (NYSE:UIS) is not the least popular stock in this group but hedge fund interest is still below average. This is a slightly negative signal and we’d rather spend our time researching stocks that hedge funds are piling on. In this regard, ASIX might be a better candidate to consider a long position.