Is Unisys Corporation (NYSE:UIS) a good investment right now? We check hedge fund and billionaire investor sentiment before delving into hours of research. Hedge funds spend millions of dollars on Ivy League graduates, expert networks, and get tips from investment bankers and industry insiders. Sure they sometimes fail miserably, but their consensus stock picks historically outperformed the market after adjusting for known risk factors.

Is Unisys Corporation (NYSE:UIS) a healthy stock for your portfolio? Prominent investors are buying. The number of bullish hedge fund positions increased by 2 lately. Our calculations also showed that uis isn’t among the 30 most popular stocks among hedge funds. UIS was in 19 hedge funds’ portfolios at the end of March. There were 17 hedge funds in our database with UIS holdings at the end of the previous quarter.

How have hedgies been trading Unisys Corporation (NYSE:UIS)? 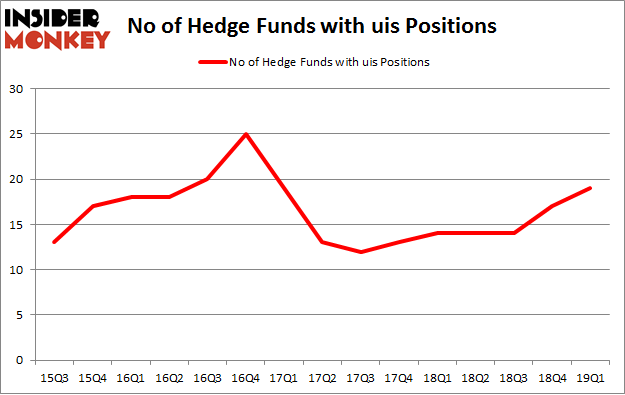 The largest stake in Unisys Corporation (NYSE:UIS) was held by Royce & Associates, which reported holding $16.6 million worth of stock at the end of March. It was followed by Millennium Management with a $10.4 million position. Other investors bullish on the company included AQR Capital Management, D E Shaw, and Portolan Capital Management.

Let’s go over hedge fund activity in other stocks – not necessarily in the same industry as Unisys Corporation (NYSE:UIS) but similarly valued. We will take a look at CEVA, Inc. (NASDAQ:CEVA), Retail Value Inc. (NYSE:RVI), Aurinia Pharmaceuticals Inc (NASDAQ:AUPH), and 500.com Limited (NYSE:WBAI). This group of stocks’ market caps are similar to UIS’s market cap.