Is The Blackstone Group Inc. (BX) Going to Burn These Hedge Funds?

Investing in small cap stocks has historically been a way to outperform the market, as small cap companies typically grow faster on average than the blue chips. That outperformance comes with a price, however, as there are occasional periods of higher volatility. The last 12 months is one of those periods, as the Russell 2000 ETF (IWM) has underperformed the larger S&P 500 ETF (SPY) by more than 10 percentage points. Given that the funds we track tend to have a disproportionate amount of their portfolios in smaller cap stocks, they have seen some volatility in their portfolios too. Actually their moves are potentially one of the factors that contributed to this volatility. In this article, we use our extensive database of hedge fund holdings to find out what the smart money thinks of The Blackstone Group Inc. (NYSE:BX).

The Blackstone Group Inc. (NYSE:BX) shareholders have witnessed a decrease in support from the world’s most elite money managers of late. BX was in 30 hedge funds’ portfolios at the end of June. There were 34 hedge funds in our database with BX holdings at the end of the previous quarter. Our calculations also showed that BX isn’t among the 30 most popular stocks among hedge funds.

Unlike some fund managers who are betting on Dow reaching 40000 in a year, our long-short investment strategy doesn’t rely on bull markets to deliver double digit returns. We only rely on hedge fund buy/sell signals. We’re going to take a gander at the recent hedge fund action regarding The Blackstone Group Inc. (NYSE:BX).

What does smart money think about The Blackstone Group Inc. (NYSE:BX)? 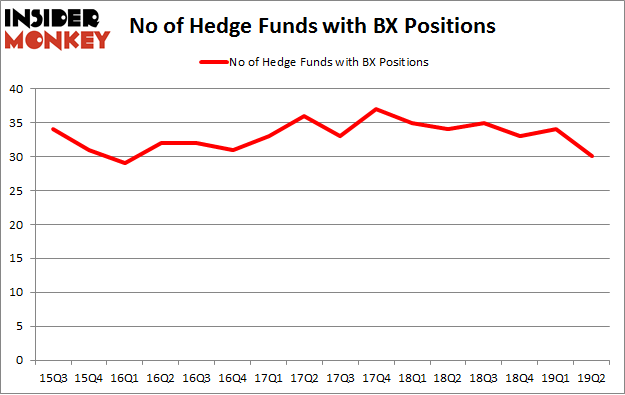 When looking at the institutional investors followed by Insider Monkey, Mick Hellman’s HMI Capital has the most valuable position in The Blackstone Group Inc. (NYSE:BX), worth close to $124.2 million, corresponding to 12.6% of its total 13F portfolio. Sitting at the No. 2 spot is Select Equity Group, managed by Robert Joseph Caruso, which holds a $108.6 million position; the fund has 0.7% of its 13F portfolio invested in the stock. Remaining peers with similar optimism include Richard Chilton’s Chilton Investment Company, Tom Gayner’s Markel Gayner Asset Management and Ken Griffin’s Citadel Investment Group.

Because The Blackstone Group Inc. (NYSE:BX) has faced bearish sentiment from the entirety of the hedge funds we track, we can see that there is a sect of money managers who sold off their full holdings last quarter. Interestingly, John W. Rogers’s Ariel Investments dropped the largest position of the “upper crust” of funds followed by Insider Monkey, valued at close to $32 million in stock. Leighton Welch’s fund, Welch Capital Partners, also sold off its stock, about $15.8 million worth. These transactions are intriguing to say the least, as total hedge fund interest fell by 4 funds last quarter.

As you can see these stocks had an average of 51 hedge funds with bullish positions and the average amount invested in these stocks was $3711 million. That figure was $519 million in BX’s case. Allergan plc (NYSE:AGN) is the most popular stock in this table. On the other hand Crown Castle International Corp. (REIT) (NYSE:CCI) is the least popular one with only 33 bullish hedge fund positions. Compared to these stocks The Blackstone Group Inc. (NYSE:BX) is even less popular than CCI. Hedge funds clearly dropped the ball on BX as the stock delivered strong returns, though hedge funds’ consensus picks still generated respectable returns. Our calculations showed that top 20 most popular stocks among hedge funds returned 24.4% in 2019 through September 30th and outperformed the S&P 500 ETF (SPY) by 4 percentage points. A small number of hedge funds were also right about betting on BX as the stock returned 11% during the third quarter and outperformed the market by an even larger margin.