The latest 13F reporting period has come and gone, and Insider Monkey is again at the forefront when it comes to making use of this gold mine of data. Insider Monkey finished processing more than 730 13F filings submitted by hedge funds and prominent investors. These filings show these funds’ portfolio positions as of June 28th, 2019. What do these smart investors think about Sentinel Energy Services Inc. (NASDAQ:STNL)?

Sentinel Energy Services Inc. (NASDAQ:STNL) shares haven’t seen a lot of action during the second quarter. Overall, hedge fund sentiment was unchanged. The stock was in 15 hedge funds’ portfolios at the end of June. The level and the change in hedge fund popularity aren’t the only variables you need to analyze to decipher hedge funds’ perspectives. A stock may witness a boost in popularity but it may still be less popular than similarly priced stocks. That’s why at the end of this article we will examine companies such as Newtek Business Services, Corp.(NASDAQ:NEWT), Loop Industries, Inc. (NASDAQ:LOOP), and Global Indemnity Limited (NASDAQ:GBLI) to gather more data points. Our calculations also showed that STNL isn’t among the 30 most popular stocks among hedge funds (see the video below). 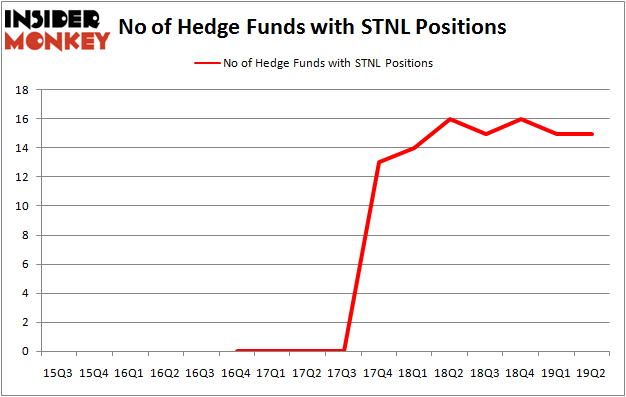 According to publicly available hedge fund and institutional investor holdings data compiled by Insider Monkey, Paul Glazer’s Glazer Capital has the number one position in Sentinel Energy Services Inc. (NASDAQ:STNL), worth close to $24 million, corresponding to 2.8% of its total 13F portfolio. The second most bullish fund manager is Isaac Corre of Governors Lane, with a $22.5 million position; the fund has 1.8% of its 13F portfolio invested in the stock. Remaining members of the smart money that hold long positions comprise Michael Platt and William Reeves’s BlueCrest Capital Mgmt., John M. Angelo and Michael L. Gordon’s Angelo Gordon & Co and Phill Gross and Robert Atchinson’s Adage Capital Management.

As you can see these stocks had an average of 5.75 hedge funds with bullish positions and the average amount invested in these stocks was $18 million. That figure was $138 million in STNL’s case. Powell Industries, Inc. (NASDAQ:POWL) is the most popular stock in this table. On the other hand Loop Industries, Inc. (NASDAQ:LOOP) is the least popular one with only 1 bullish hedge fund positions. Compared to these stocks Sentinel Energy Services Inc. (NASDAQ:STNL) is more popular among hedge funds. Our calculations showed that top 20 most popular stocks among hedge funds returned 24.4% in 2019 through September 30th and outperformed the S&P 500 ETF (SPY) by 4 percentage points. Unfortunately STNL wasn’t nearly as popular as these 20 stocks and hedge funds that were betting on STNL were disappointed as the stock returned 1.3% during the third quarter and underperformed the market. If you are interested in investing in large cap stocks with huge upside potential, you should check out the top 20 most popular stocks among hedge funds as many of these stocks already outperformed the market in Q3.