“Market volatility has picked up again over the past few weeks. Headlines highlight risks regarding interest rates, the Fed, China, house prices, auto sales, trade wars, and more. Uncertainty abounds. But doesn’t it always? I have no view on whether the recent volatility will continue for a while, or whether the market will be back at all-time highs before we know it. I remain focused on preserving and growing our capital, and continue to believe that the best way to do so is via a value-driven, concentrated, patient approach. I shun consensus holdings, rich valuations, and market fads, in favor of solid, yet frequently off-the-beaten-path, businesses run by excellent, aligned management teams, purchased at deep discounts to intrinsic value,” are the words of Maran Capital’s Dan Roller. His stock picks have been beating the S&P 500 Index handily. We pay attention to what hedge funds are doing in a particular stock before considering a potential investment because it works for us. So let’s take a glance at the smart money sentiment towards Sentinel Energy Services Inc. (NASDAQ:STNL) which received a vote of confidence from hedge fund Governors Lane.

Sentinel Energy Services Inc. (NASDAQ:STNL) investors should be aware of an increase in activity from the world’s largest hedge funds of late. STNL was in 16 hedge funds’ portfolios at the end of the second quarter of 2018. There were 14 hedge funds in our database with STNL positions at the end of the previous quarter. More recently, hedge fund Governors Lane increased its Sentinel Energy Services position by 750K shares and disclosed this in a regulatory filing. Isaac Corre owned 1.47 million shares of the stock at the end of June. This means Isaac Corre’s stake in the company surpassed Seth Klarman’s stake.

To most stock holders, hedge funds are seen as worthless, outdated investment tools of years past. While there are greater than 8000 funds in operation at present, Our researchers look at the elite of this group, about 700 funds. Most estimates calculate that this group of people manage most of the smart money’s total capital, and by observing their first-class picks, Insider Monkey has unsheathed various investment strategies that have historically outrun the S&P 500 index. Insider Monkey’s flagship best performing hedge funds strategy returned 17.4% year to date and outperformed the market by more than 14 percentage points this year. This strategy also outperformed the market by 3 percentage points in the fourth quarter despite the market volatility (see the details here). That’s why we believe hedge fund sentiment is a useful indicator that investors should pay attention to.

What does the smart money think about Sentinel Energy Services Inc. (NASDAQ:STNL)?

At Q3’s end, a total of 16 of the hedge funds tracked by Insider Monkey were long this stock, a change of 14% from the second quarter of 2018. Below, you can check out the change in hedge fund sentiment towards STNL over the last 6 quarters. With hedgies’ sentiment swirling, there exists a few notable hedge fund managers who were upping their holdings significantly (or already accumulated large positions). 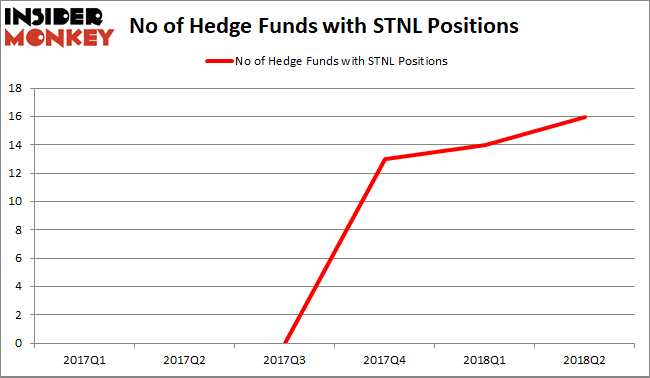 Among these funds, Brenham Capital Management held the most valuable stake in Sentinel Energy Services Inc. (NASDAQ:STNL), which was worth $20.7 millions at the end of the second quarter. On the second spot was Baupost Group which amassed $16.1 millions worth of shares. Moreover, Angelo Gordon & Co, Glazer Capital, and Governors Lane were also bullish on Sentinel Energy Services Inc. (NASDAQ:STNL), allocating a large percentage of their portfolios to this stock.

As you can see these stocks had an average of 9 hedge funds with bullish positions and the average amount invested in these stocks was $54 million. That figure was $143 million in STNL’s case. Depomed Inc (NASDAQ:DEPO) is the most popular stock in this table. On the other hand Century Bancorp, Inc. (NASDAQ:CNBKA) is the least popular one with only 3 bullish hedge fund positions. Sentinel Energy Services Inc. (NASDAQ:STNL) is not the most popular stock in this group but hedge fund interest is still above average. This is a slightly positive signal but we’d rather spend our time researching stocks that hedge funds are piling on. In this regard DEPO might be a better candidate in this market cap bracket to consider a long position. Overall, though, we recommend investors should take a look at the 25 most popular stocks among hedge funds for investment ideas.