Is Rio Tinto Group (RIO) A Good Stock To Buy?

How do you pick the next stock to invest in? One way would be to spend days of research browsing through thousands of publicly traded companies. However, an easier way is to look at the stocks that smart money investors are collectively bullish on. Hedge funds and other institutional investors usually invest large amounts of capital and have to conduct due diligence while choosing their next pick. They don’t always get it right, but, on average, their stock picks historically generated strong returns after adjusting for known risk factors. With this in mind, let’s take a look at the recent hedge fund activity surrounding Rio Tinto Group (NYSE:RIO).

Is Rio Tinto Group (NYSE:RIO) a safe investment today? Investors who are in the know are becoming less confident. The number of long hedge fund positions were cut by 3 lately. Our calculations also showed that RIO isn’t among the 30 most popular stocks among hedge funds (click for Q3 rankings and see the video below for Q2 rankings). RIO was in 21 hedge funds’ portfolios at the end of September. There were 24 hedge funds in our database with RIO holdings at the end of the previous quarter.

At the moment there are dozens of formulas investors employ to grade their holdings. A couple of the less known formulas are hedge fund and insider trading indicators. Our experts have shown that, historically, those who follow the best picks of the best money managers can outperform the broader indices by a significant amount (see the details here).

Unlike the largest US hedge funds that are convinced Dow will soar past 40,000 or the world’s most bearish hedge fund that’s more convinced than ever that a crash is coming, our long-short investment strategy doesn’t rely on bull or bear markets to deliver double digit returns. We only rely on the best performing hedge funds‘ buy/sell signals. We’re going to review the recent hedge fund action encompassing Rio Tinto Group (NYSE:RIO). 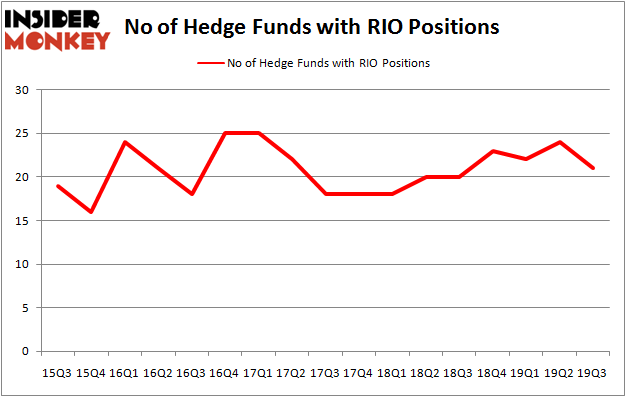 The largest stake in Rio Tinto Group (NYSE:RIO) was held by Fisher Asset Management, which reported holding $567.5 million worth of stock at the end of September. It was followed by Arrowstreet Capital with a $563.4 million position. Other investors bullish on the company included Impala Asset Management, Two Sigma Advisors, and Renaissance Technologies. In terms of the portfolio weights assigned to each position Impala Asset Management allocated the biggest weight to Rio Tinto Group (NYSE:RIO), around 7.96% of its 13F portfolio. Gabalex Capital is also relatively very bullish on the stock, designating 4.21 percent of its 13F equity portfolio to RIO.

Since Rio Tinto Group (NYSE:RIO) has faced falling interest from hedge fund managers, logic holds that there was a specific group of money managers that elected to cut their positions entirely by the end of the third quarter. Intriguingly, Todd J. Kantor’s Encompass Capital Advisors said goodbye to the biggest investment of all the hedgies monitored by Insider Monkey, valued at about $18.7 million in stock. Paul Marshall and Ian Wace’s fund, Marshall Wace, also dumped its stock, about $13.9 million worth. These moves are intriguing to say the least, as aggregate hedge fund interest was cut by 3 funds by the end of the third quarter.

As you can see these stocks had an average of 49.25 hedge funds with bullish positions and the average amount invested in these stocks was $4954 million. That figure was $1491 million in RIO’s case. Booking Holdings Inc. (NASDAQ:BKNG) is the most popular stock in this table. On the other hand British American Tobacco plc (NYSE:BTI) is the least popular one with only 8 bullish hedge fund positions. Rio Tinto Group (NYSE:RIO) is not the least popular stock in this group but hedge fund interest is still below average. This is a slightly negative signal and we’d rather spend our time researching stocks that hedge funds are piling on. Our calculations showed that top 20 most popular stocks among hedge funds returned 37.4% in 2019 through the end of November and outperformed the S&P 500 ETF (SPY) by 9.9 percentage points. Unfortunately RIO wasn’t nearly as popular as these 20 stocks (hedge fund sentiment was quite bearish); RIO investors were disappointed as the stock returned 4.7% during the first two months of the fourth quarter and underperformed the market. If you are interested in investing in large cap stocks with huge upside potential, you should check out the top 20 most popular stocks among hedge funds as 70 percent of these stocks already outperformed the market in Q4.

Hedge Funds Have Never Been This Bullish On Morningstar, Inc. (MORN)
Monthly Newsletter Strategy
Download a free copy of our newsletter and see the details inside!
Hedge Fund Resource Center
Related News
Here is What Hedge Funds Think About Rio Tinto Group (RIO) Were Hedge Funds Right About Buying Rio Tinto Group (RIO)? Should You Buy Rio Tinto plc (RIO)? Is Rio Tinto (RIO) A Hidden Gem or a Chunk of Coal? Billionaire Ken Fisher is Bullish About These Dividend Stocks Five Uranium Stocks to Buy According to Hedge Funds Do Hedge Funds Love Rio Tinto plc (ADR) (RIO)? 20 Countries With Highest Military Spending In The World 10 Countries That Smoke The Least 10 Highest Paid CEOs in the World in 2019
Billionaire Hedge Funds