Out of thousands of stocks that are currently traded on the market, it is difficult to identify those that will really generate strong returns. Hedge funds and institutional investors spend millions of dollars on analysts with MBAs and PhDs, who are industry experts and well connected to other industry and media insiders on top of that. Individual investors can piggyback the hedge funds employing these talents and can benefit from their vast resources and knowledge in that way. We analyze quarterly 13F filings of nearly 750 hedge funds and, by looking at the smart money sentiment that surrounds a stock, we can determine whether it has the potential to beat the market over the long-term. Therefore, let’s take a closer look at what smart money thinks about Pioneer Natural Resources Company (NYSE:PXD).

Is Pioneer Natural Resources Company (NYSE:PXD) a bargain? Money managers are in a bearish mood. The number of bullish hedge fund positions shrunk by 7 recently. Our calculations also showed that PXD isn’t among the 30 most popular stocks among hedge funds. PXD was in 48 hedge funds’ portfolios at the end of June. There were 55 hedge funds in our database with PXD positions at the end of the previous quarter.

Unlike some fund managers who are betting on Dow reaching 40000 in a year, our long-short investment strategy doesn’t rely on bull markets to deliver double digit returns. We only rely on hedge fund buy/sell signals. We’re going to take a glance at the latest hedge fund action regarding Pioneer Natural Resources Company (NYSE:PXD).

What have hedge funds been doing with Pioneer Natural Resources Company (NYSE:PXD)?

At Q2’s end, a total of 48 of the hedge funds tracked by Insider Monkey were long this stock, a change of -13% from one quarter earlier. Below, you can check out the change in hedge fund sentiment towards PXD over the last 16 quarters. With the smart money’s capital changing hands, there exists an “upper tier” of notable hedge fund managers who were increasing their stakes meaningfully (or already accumulated large positions). 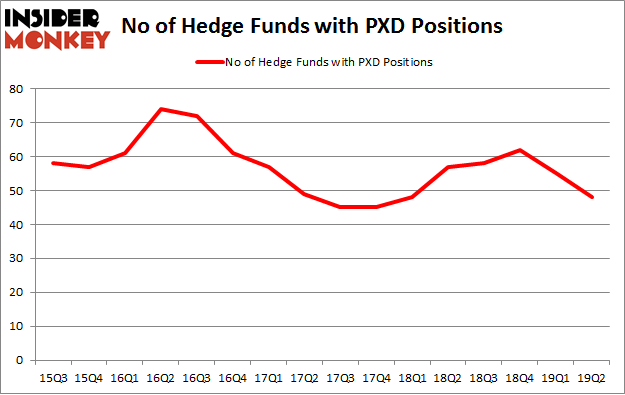 The largest stake in Pioneer Natural Resources Company (NYSE:PXD) was held by Adage Capital Management, which reported holding $165.2 million worth of stock at the end of March. It was followed by Abrams Bison Investments with a $78 million position. Other investors bullish on the company included Ariel Investments, Citadel Investment Group, and D E Shaw.

Judging by the fact that Pioneer Natural Resources Company (NYSE:PXD) has experienced falling interest from the aggregate hedge fund industry, logic holds that there exists a select few fund managers who were dropping their positions entirely by the end of the second quarter. At the top of the heap, Seth Klarman’s Baupost Group dropped the largest position of the “upper crust” of funds monitored by Insider Monkey, worth an estimated $304.8 million in call options, and Ryan Pedlow’s Two Creeks Capital Management was right behind this move, as the fund dropped about $15.5 million worth. These bearish behaviors are important to note, as total hedge fund interest was cut by 7 funds by the end of the second quarter.

As you can see these stocks had an average of 26.5 hedge funds with bullish positions and the average amount invested in these stocks was $1000 million. That figure was $842 million in PXD’s case. Synchrony Financial (NYSE:SYF) is the most popular stock in this table. On the other hand Fresenius Medical Care AG & Co. KGaA (NYSE:FMS) is the least popular one with only 9 bullish hedge fund positions. Compared to these stocks Pioneer Natural Resources Company (NYSE:PXD) is more popular among hedge funds. Our calculations showed that top 20 most popular stocks among hedge funds returned 24.4% in 2019 through September 30th and outperformed the S&P 500 ETF (SPY) by 4 percentage points. Unfortunately PXD wasn’t nearly as popular as these 20 stocks and hedge funds that were betting on PXD were disappointed as the stock returned -18% during the third quarter and underperformed the market. If you are interested in investing in large cap stocks with huge upside potential, you should check out the top 20 most popular stocks among hedge funds as many of these stocks already outperformed the market in Q3.