Is On Deck Capital Inc (ONDK) A Good Stock To Buy?

As we already know from media reports and hedge fund investor letters, hedge funds delivered their best returns in a decade. Most investors who decided to stick with hedge funds after a rough 2018 recouped their losses by the end of the second quarter. We get to see hedge funds’ thoughts towards the market and individual stocks by aggregating their quarterly portfolio movements and reading their investor letters. In this article, we will particularly take a look at what hedge funds think about On Deck Capital Inc (NYSE:ONDK).

Is On Deck Capital Inc (NYSE:ONDK) going to take off soon? Investors who are in the know are taking a pessimistic view. The number of bullish hedge fund positions dropped by 1 in recent months. Our calculations also showed that ONDK isn’t among the 30 most popular stocks among hedge funds (see the video below). ONDK was in 18 hedge funds’ portfolios at the end of June. There were 19 hedge funds in our database with ONDK positions at the end of the previous quarter.

In the eyes of most market participants, hedge funds are viewed as unimportant, old financial tools of the past. While there are more than 8000 funds trading at the moment, We look at the leaders of this group, about 750 funds. These money managers command the majority of the hedge fund industry’s total capital, and by observing their inimitable picks, Insider Monkey has spotted many investment strategies that have historically outpaced the broader indices. Insider Monkey’s flagship hedge fund strategy outstripped the S&P 500 index by around 5 percentage points per year since its inception in May 2014. We were able to generate large returns even by identifying short candidates. Our portfolio of short stocks lost 25.7% since February 2017 (through September 30th) even though the market was up more than 33% during the same period. We just shared a list of 10 short targets in our latest quarterly update . 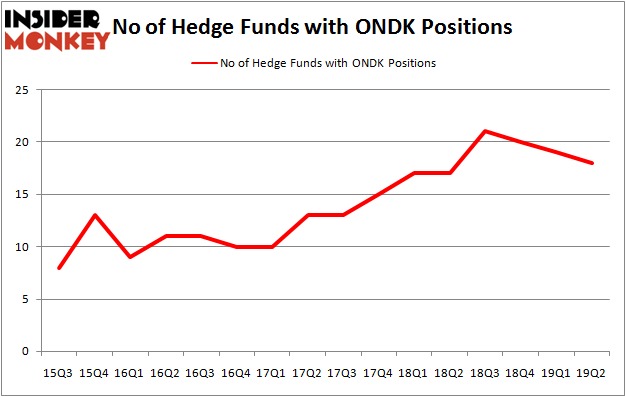 What does smart money think about On Deck Capital Inc (NYSE:ONDK)?

At Q2’s end, a total of 18 of the hedge funds tracked by Insider Monkey were bullish on this stock, a change of -5% from the previous quarter. On the other hand, there were a total of 17 hedge funds with a bullish position in ONDK a year ago. With the smart money’s sentiment swirling, there exists an “upper tier” of notable hedge fund managers who were boosting their stakes significantly (or already accumulated large positions).

The largest stake in On Deck Capital Inc (NYSE:ONDK) was held by Nantahala Capital Management, which reported holding $26.2 million worth of stock at the end of March. It was followed by Renaissance Technologies with a $22.3 million position. Other investors bullish on the company included 683 Capital Partners, Basswood Capital, and D E Shaw.

Judging by the fact that On Deck Capital Inc (NYSE:ONDK) has witnessed falling interest from the entirety of the hedge funds we track, it’s easy to see that there exists a select few hedge funds that elected to cut their positions entirely in the second quarter. At the top of the heap, Principal Global Investors’s Columbus Circle Investors dropped the biggest stake of the “upper crust” of funds tracked by Insider Monkey, worth about $0.7 million in stock. David Costen Haley’s fund, HBK Investments, also dropped its stock, about $0.5 million worth. These moves are important to note, as aggregate hedge fund interest fell by 1 funds in the second quarter.

As you can see these stocks had an average of 10.75 hedge funds with bullish positions and the average amount invested in these stocks was $23 million. That figure was $92 million in ONDK’s case. Ryerson Holding Corporation (NYSE:RYI) is the most popular stock in this table. On the other hand Jumei International Holding Ltd (NYSE:JMEI) is the least popular one with only 6 bullish hedge fund positions. Compared to these stocks On Deck Capital Inc (NYSE:ONDK) is more popular among hedge funds. Our calculations showed that top 20 most popular stocks among hedge funds returned 24.4% in 2019 through September 30th and outperformed the S&P 500 ETF (SPY) by 4 percentage points. Unfortunately ONDK wasn’t nearly as popular as these 20 stocks and hedge funds that were betting on ONDK were disappointed as the stock returned -19% during the third quarter and underperformed the market. If you are interested in investing in large cap stocks with huge upside potential, you should check out the top 20 most popular stocks among hedge funds as many of these stocks already outperformed the market in Q3.