Hedge Funds Are Crazy About On Deck Capital Inc (ONDK)

The elite funds run by legendary investors such as Dan Loeb and David Tepper make hundreds of millions of dollars for themselves and their investors by spending enormous resources doing research on small cap stocks that big investment banks don’t follow. Because of their pay structures, they have strong incentive to do the research necessary to beat the market. That’s why we pay close attention to what they think in small cap stocks. In this article, we take a closer look at On Deck Capital Inc (NYSE:ONDK) from the perspective of those elite funds.

On Deck Capital Inc (NYSE:ONDK) investors should pay attention to an increase in hedge fund interest in recent months. Our calculations also showed that ONDK isn’t among the 30 most popular stocks among hedge funds.

What have hedge funds been doing with On Deck Capital Inc (NYSE:ONDK)?

At Q3’s end, a total of 21 of the hedge funds tracked by Insider Monkey were long this stock, a change of 24% from the second quarter of 2018. On the other hand, there were a total of 15 hedge funds with a bullish position in ONDK at the beginning of this year. With the smart money’s capital changing hands, there exists an “upper tier” of notable hedge fund managers who were upping their stakes considerably (or already accumulated large positions). 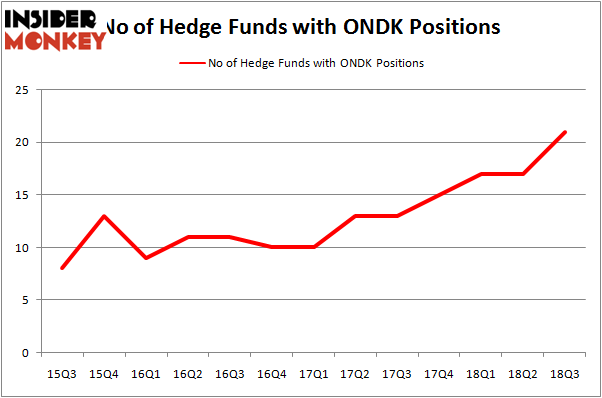 Among these funds, Portolan Capital Management held the most valuable stake in On Deck Capital Inc (NYSE:ONDK), which was worth $30.7 million at the end of the third quarter. On the second spot was Nantahala Capital Management which amassed $28.8 million worth of shares. Moreover, Renaissance Technologies, 683 Capital Partners, and EJF Capital were also bullish on On Deck Capital Inc (NYSE:ONDK), allocating a large percentage of their portfolios to this stock.

As aggregate interest increased, key money managers were leading the bulls’ herd. Columbus Circle Investors, managed by Principal Global Investors, assembled the largest position in On Deck Capital Inc (NYSE:ONDK). Columbus Circle Investors had $7.6 million invested in the company at the end of the quarter. Benjamin A. Smith’s Laurion Capital Management also made a $0.8 million investment in the stock during the quarter. The other funds with new positions in the stock are Peter Algert and Kevin Coldiron’s Algert Coldiron Investors, Jeffrey Talpins’s Element Capital Management, and Mike Vranos’s Ellington.

As you can see these stocks had an average of 5.75 hedge funds with bullish positions and the average amount invested in these stocks was $47 million. That figure was $164 million in ONDK’s case. Tejon Ranch Company (NYSE:TRC) is the most popular stock in this table. On the other hand Putnam Premier Income Trust (NYSE:PPT) is the least popular one with only 1 bullish hedge fund positions. Compared to these stocks On Deck Capital Inc (NYSE:ONDK) is more popular among hedge funds. Considering that hedge funds are fond of this stock in relation to its market cap peers, it may be a good idea to analyze it in detail and potentially include it in your portfolio.