While the market driven by short-term sentiment influenced by uncertainty regarding the future of the interest rate environment in the US, declining oil prices and the trade war with China, many smart money investors kept their optimism regarding the current bull run in the fourth quarter, while still hedging many of their long positions. However, as we know, big investors usually buy stocks with strong fundamentals, which is why we believe we can profit from imitating them. In this article, we are going to take a look at the smart money sentiment surrounding On Deck Capital Inc (NYSE:ONDK).

Is On Deck Capital Inc (NYSE:ONDK) an outstanding investment now? Money managers are in a pessimistic mood. The number of bullish hedge fund positions were cut by 1 lately. Our calculations also showed that ONDK isn’t among the 30 most popular stocks among hedge funds. ONDK was in 20 hedge funds’ portfolios at the end of December. There were 21 hedge funds in our database with ONDK positions at the end of the previous quarter.

Today there are a large number of tools investors can use to analyze their holdings. A duo of the most innovative tools are hedge fund and insider trading signals. Our researchers have shown that, historically, those who follow the top picks of the top fund managers can outclass the broader indices by a solid margin (see the details here). 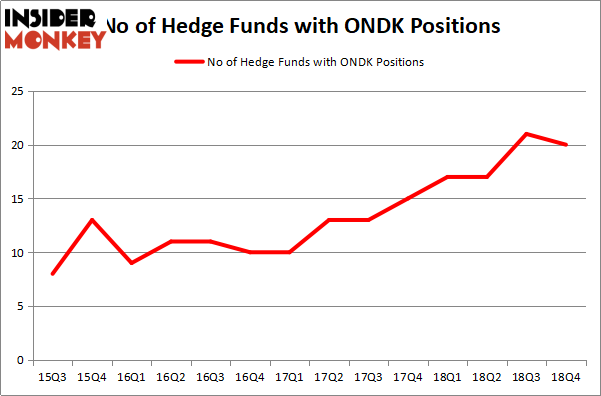 The largest stake in On Deck Capital Inc (NYSE:ONDK) was held by Nantahala Capital Management, which reported holding $24 million worth of stock at the end of December. It was followed by Renaissance Technologies with a $22.9 million position. Other investors bullish on the company included Portolan Capital Management, 683 Capital Partners, and Hawk Ridge Management.

Seeing as On Deck Capital Inc (NYSE:ONDK) has witnessed a decline in interest from the smart money, logic holds that there exists a select few hedgies that elected to cut their full holdings by the end of the third quarter. Intriguingly, Emanuel J. Friedman’s EJF Capital said goodbye to the largest stake of the 700 funds monitored by Insider Monkey, worth an estimated $13 million in stock. Michael Barnes and Arif Inayatullah’s fund, Tricadia Capital Management, also dumped its stock, about $2.7 million worth. These transactions are intriguing to say the least, as aggregate hedge fund interest was cut by 1 funds by the end of the third quarter.

Let’s now take a look at hedge fund activity in other stocks similar to On Deck Capital Inc (NYSE:ONDK). We will take a look at Ready Capital Corporation (NYSE:RC), Mesoblast Limited (NASDAQ:MESO), Team, Inc. (NYSE:TISI), and BioSpecifics Technologies Corp. (NASDAQ:BSTC). All of these stocks’ market caps are closest to ONDK’s market cap.