Is Nestle SA (NSRGY) A Good Stock To Buy?

Nestle SA (OTCMKTS:NSRGY) has seen a decrease in activity from the world’s largest hedge funds recently. NSRGY was in 4 hedge funds’ portfolios at the end of December. There were 5 hedge funds in our database with NSRGY holdings at the end of the previous quarter. Our calculations also showed that NSRGY isn’t among the 30 most popular stocks among hedge funds.

What have hedge funds been doing with Nestle SA (OTCMKTS:NSRGY)? 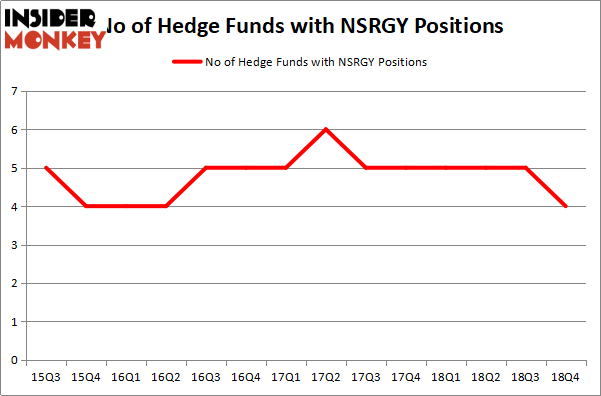 Of the funds tracked by Insider Monkey, Tom Russo’s Gardner Russo & Gardner has the number one position in Nestle SA (OTCMKTS:NSRGY), worth close to $1.2061 billion, accounting for 10% of its total 13F portfolio. Sitting at the No. 2 spot is Ken Fisher of Fisher Asset Management, with a $276 million position; the fund has 0.4% of its 13F portfolio invested in the stock. Some other hedge funds and institutional investors that hold long positions include Ed Beddow and William Tichy’s Beddow Capital Management, Scott Wallace’s Wallace Capital Management and .

We view hedge fund activity in the stock unfavorable, but in this case there was only a single hedge fund selling its entire position: Eagle Capital Management. One hedge fund selling its entire position doesn’t always imply a bearish intent. Theoretically a hedge fund may decide to sell a promising position in order to invest the proceeds in a more promising idea. However, we don’t think this is the case in this case because none of the 700+ hedge funds tracked by Insider Monkey identified NSRGY as a viable investment and initiated a position in the stock.

Let’s go over hedge fund activity in other stocks – not necessarily in the same industry as Nestle SA (OTCMKTS:NSRGY) but similarly valued. We will take a look at Royal Dutch Shell plc (NYSE:RDS), Pfizer Inc. (NYSE:PFE), Bank of America Corporation (NYSE:BAC), and UnitedHealth Group Inc. (NYSE:UNH). This group of stocks’ market values are closest to NSRGY’s market value.

As you can see these stocks had an average of 68.25 hedge funds with bullish positions and the average amount invested in these stocks was $10135 million. That figure was $1502 million in NSRGY’s case. Bank of America Corporation (NYSE:BAC) is the most popular stock in this table. On the other hand Royal Dutch Shell plc (NYSE:RDS) is the least popular one with only 33 bullish hedge fund positions. Compared to these stocks Nestle SA (OTCMKTS:NSRGY) is even less popular than RDS. Our calculations showed that top 15 most popular stocks among hedge funds returned 19.7% through March 15th and outperformed the S&P 500 ETF (SPY) by 6.6 percentage points. Hedge funds were also right about betting on Nestle as the stock returned 15.5% and outperformed the market as well.

These Hedge Funds Were Right Betting On Corindus Vascular Robotics Inc (CVRS...
Monthly Newsletter Strategy
Download a free copy of our newsletter and see the details inside!
Hedge Fund Resource Center
Related News
11 Most Popular Snacks In The World 10 Best Bottled Water for Babies to Drink 10 Most Profitable Companies In Europe 10 Largest Bottled Water Companies In The World Cochineal Insects Products: 7 Foods Made With Crushed Bugs Gardner Russo & Gardner Betting on Beer, Cigarettes, and the Credit Needed to Buy Them Is Nestle SA Reg Shs. Ser. B Spons (ADR) (NSRGY) A Good Stock To Buy? Ten of the Most Common Addictions 13 African Countries with the Largest White Population in 2018 6 Causes of Human Trafficking in Africa, India, and US
Billionaire Hedge Funds