Is Fate Therapeutics Inc (FATE) A Good Stock To Buy?

Does Fate Therapeutics Inc (NASDAQ:FATE) represent a good buying opportunity at the moment? Let’s briefly check the hedge fund interest towards the company. Hedge fund firms constantly search out bright intellectuals and highly-experienced employees and throw away millions of dollars on satellite photos and other research activities, so it is no wonder why they tend to generate millions in profits each year. It is also true that some hedge fund players fail inconceivably on some occasions, but net net their stock picks have been generating superior risk-adjusted returns on average over the years.

Is Fate Therapeutics Inc (NASDAQ:FATE) going to take off soon? Hedge funds are taking a bearish view. The number of long hedge fund positions went down by 2 recently. Our calculations also showed that fate isn’t among the 30 most popular stocks among hedge funds. FATE was in 15 hedge funds’ portfolios at the end of December. There were 17 hedge funds in our database with FATE positions at the end of the previous quarter.

What does the smart money think about Fate Therapeutics Inc (NASDAQ:FATE)?

At the end of the fourth quarter, a total of 15 of the hedge funds tracked by Insider Monkey were long this stock, a change of -12% from the second quarter of 2018. Below, you can check out the change in hedge fund sentiment towards FATE over the last 14 quarters. So, let’s examine which hedge funds were among the top holders of the stock and which hedge funds were making big moves. 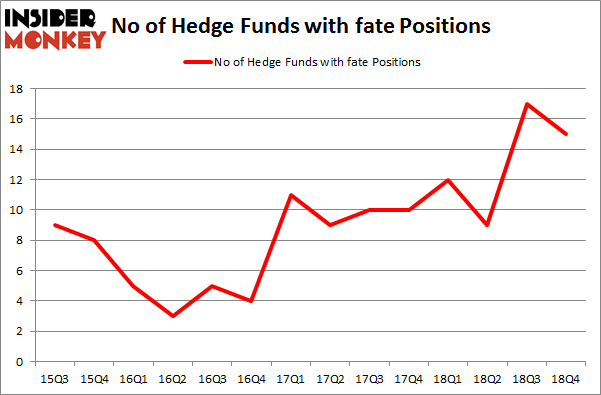 More specifically, Redmile Group was the largest shareholder of Fate Therapeutics Inc (NASDAQ:FATE), with a stake worth $135.7 million reported as of the end of December. Trailing Redmile Group was Casdin Capital, which amassed a stake valued at $32.7 million. Farallon Capital, Deerfield Management, and Partner Fund Management were also very fond of the stock, giving the stock large weights in their portfolios.

Judging by the fact that Fate Therapeutics Inc (NASDAQ:FATE) has experienced falling interest from the entirety of the hedge funds we track, it’s easy to see that there lies a certain “tier” of funds that slashed their positions entirely in the third quarter. It’s worth mentioning that Vishal Saluja and Pham Quang’s Endurant Capital Management said goodbye to the biggest position of the “upper crust” of funds monitored by Insider Monkey, totaling close to $3.3 million in stock. Jim Simons’s fund, Renaissance Technologies, also cut its stock, about $1.5 million worth. These bearish behaviors are interesting, as aggregate hedge fund interest dropped by 2 funds in the third quarter.

As you can see these stocks had an average of 12.75 hedge funds with bullish positions and the average amount invested in these stocks was $128 million. That figure was $286 million in FATE’s case. Churchill Capital Corp (NYSE:CCC) is the most popular stock in this table. On the other hand Duluth Holdings Inc. (NASDAQ:DLTH) is the least popular one with only 8 bullish hedge fund positions. Fate Therapeutics Inc (NASDAQ:FATE) is not the most popular stock in this group but hedge fund interest is still above average. Our calculations showed that top 15 most popular stocks) among hedge funds returned 24.2% through April 22nd and outperformed the S&P 500 ETF (SPY) by more than 7 percentage points. Hedge funds were also right about betting on FATE as the stock returned 26.5% and outperformed the market by an even larger margin. Hedge funds were rewarded for their relative bullishness.