The elite funds run by legendary investors such as Dan Loeb and David Tepper make hundreds of millions of dollars for themselves and their investors by spending enormous resources doing research on small cap stocks that big investment banks don’t follow. Because of their pay structures, they have strong incentive to do the research necessary to beat the market. That’s why we pay close attention to what they think in small cap stocks. In this article, we take a closer look at Dunkin Brands Group Inc (NASDAQ:DNKN) from the perspective of those elite funds.

Dunkin Brands Group Inc (NASDAQ:DNKN) has seen an increase in activity from the world’s largest hedge funds of late. DNKN was in 12 hedge funds’ portfolios at the end of the third quarter of 2018. There were 11 hedge funds in our database with DNKN positions at the end of the previous quarter. Our calculations also showed that DNKN isn’t among the 30 most popular stocks among hedge funds.

To most traders, hedge funds are perceived as underperforming, old financial tools of yesteryear. While there are greater than 8,000 funds with their doors open at the moment, We choose to focus on the elite of this group, around 700 funds. These hedge fund managers direct most of all hedge funds’ total asset base, and by watching their best picks, Insider Monkey has unsheathed several investment strategies that have historically defeated the broader indices. Insider Monkey’s flagship hedge fund strategy outrun the S&P 500 index by 6 percentage points per annum since its inception in May 2014 through early November 2018. We were able to generate large returns even by identifying short candidates. Our portfolio of short stocks lost 24% since February 2017 (through December 3rd) even though the market was up nearly 23% during the same period. We just shared a list of 11 short targets in our latest quarterly update.

What have hedge funds been doing with Dunkin Brands Group Inc (NASDAQ:DNKN)?

At the end of the third quarter, a total of 12 of the hedge funds tracked by Insider Monkey held long positions in this stock, a change of 9% from the second quarter of 2018. Below, you can check out the change in hedge fund sentiment towards DNKN over the last 13 quarters. So, let’s find out which hedge funds were among the top holders of the stock and which hedge funds were making big moves. 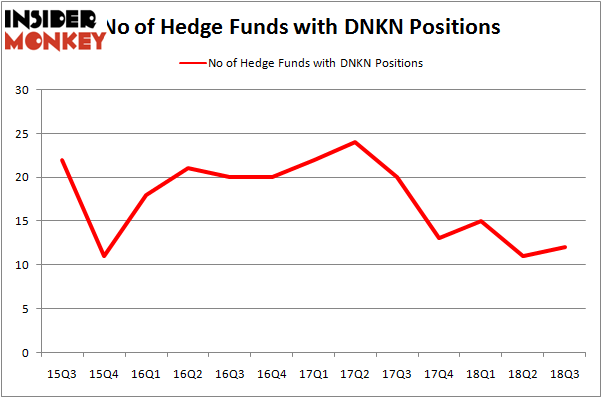 Among these funds, Samlyn Capital held the most valuable stake in Dunkin Brands Group Inc (NASDAQ:DNKN), which was worth $11.7 million at the end of the third quarter. On the second spot was Millennium Management which amassed $10.3 million worth of shares. Moreover, Citadel Investment Group, PEAK6 Capital Management, and GLG Partners were also bullish on Dunkin Brands Group Inc (NASDAQ:DNKN), allocating a large percentage of their portfolios to this stock.

As industrywide interest jumped, some big names were breaking ground themselves. Samlyn Capital, managed by Robert Pohly, assembled the most outsized position in Dunkin Brands Group Inc (NASDAQ:DNKN). Samlyn Capital had $11.7 million invested in the company at the end of the quarter. D. E. Shaw’s D E Shaw also made a $0.8 million investment in the stock during the quarter. The following funds were also among the new DNKN investors: Paul Marshall and Ian Wace’s Marshall Wace LLP, Paul Tudor Jones’s Tudor Investment Corp, and Brandon Haley’s Holocene Advisors.

As you can see these stocks had an average of 22.25 hedge funds with bullish positions and the average amount invested in these stocks was $435 million. That figure was $30 million in DNKN’s case. Etsy Inc (NASDAQ:ETSY) is the most popular stock in this table. On the other hand Grupo Aeroportuario del Sureste (NYSE:ASR) is the least popular one with only 3 bullish hedge fund positions. Dunkin Brands Group Inc (NASDAQ:DNKN) is not the least popular stock in this group but hedge fund interest is still below average. This is a slightly negative signal and we’d rather spend our time researching stocks that hedge funds are piling on. In this regard ETSY might be a better candidate to consider a long position.