While the market driven by short-term sentiment influenced by the accomodative interest rate environment in the US, increasing oil prices and deteriorating expectations towards the resolution of the trade war with China, many smart money investors kept their cautious approach regarding the current bull run in the second quarter and hedging or reducing many of their long positions. Some fund managers like this one are betting on Dow hitting 40,000 to generate strong returns. However, as we know, big investors usually buy stocks with strong fundamentals that can deliver gains both in bull and bear markets, which is why we believe we can profit from imitating them. In this article, we are going to take a look at the smart money sentiment surrounding Deutsche Bank Aktiengesellschaft (NYSE:DB).

Deutsche Bank Aktiengesellschaft (NYSE:DB) shareholders have witnessed a decrease in hedge fund sentiment lately. DB was in 11 hedge funds’ portfolios at the end of June. There were 13 hedge funds in our database with DB positions at the end of the previous quarter. Our calculations also showed that DB isn’t among the 30 most popular stocks among hedge funds (see the video below). 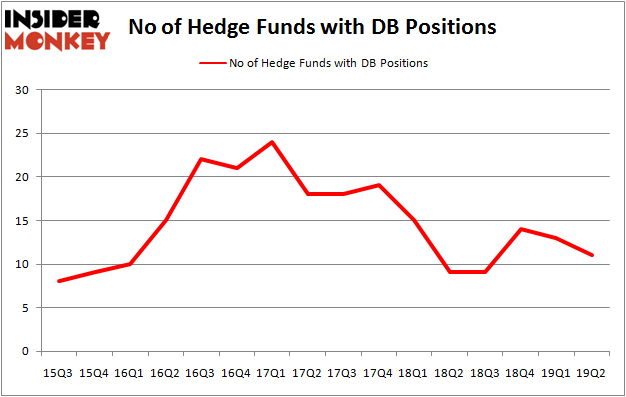 Unlike some fund managers who are betting on Dow reaching 40000 in a year, our long-short investment strategy doesn’t rely on bull markets to deliver double digit returns. We only rely on hedge fund buy/sell signals. We’re going to take a gander at the recent hedge fund action regarding Deutsche Bank Aktiengesellschaft (NYSE:DB).

What does smart money think about Deutsche Bank Aktiengesellschaft (NYSE:DB)?

Heading into the third quarter of 2019, a total of 11 of the hedge funds tracked by Insider Monkey were long this stock, a change of -15% from one quarter earlier. On the other hand, there were a total of 9 hedge funds with a bullish position in DB a year ago. With the smart money’s sentiment swirling, there exists an “upper tier” of noteworthy hedge fund managers who were adding to their holdings substantially (or already accumulated large positions). 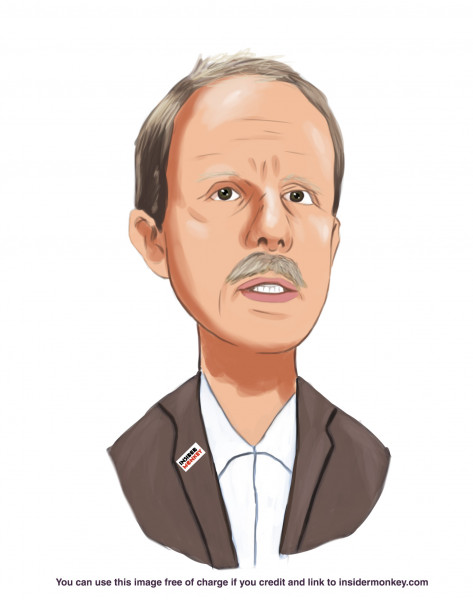 The largest stake in Deutsche Bank Aktiengesellschaft (NYSE:DB) was held by Hudson Executive Capital, which reported holding $500.1 million worth of stock at the end of March. It was followed by Cerberus Capital Management with a $478.3 million position. Other investors bullish on the company included Masters Capital Management, Citadel Investment Group, and Granite Point Capital.

Due to the fact that Deutsche Bank Aktiengesellschaft (NYSE:DB) has witnessed declining sentiment from the aggregate hedge fund industry, we can see that there exists a select few money managers that decided to sell off their entire stakes in the second quarter. It’s worth mentioning that John Overdeck and David Siegel’s Two Sigma Advisors cut the biggest position of the 750 funds monitored by Insider Monkey, comprising close to $5.9 million in stock. Jeffrey Gendell’s fund, Tontine Asset Management, also said goodbye to its stock, about $0.3 million worth. These moves are intriguing to say the least, as aggregate hedge fund interest was cut by 2 funds in the second quarter.

As you can see these stocks had an average of 25.5 hedge funds with bullish positions and the average amount invested in these stocks was $881 million. That figure was $1016 million in DB’s case. MGM Resorts International (NYSE:MGM) is the most popular stock in this table. On the other hand KB Financial Group, Inc. (NYSE:KB) is the least popular one with only 9 bullish hedge fund positions. Deutsche Bank Aktiengesellschaft (NYSE:DB) is not the least popular stock in this group but hedge fund interest is still below average. This is a slightly negative signal and we’d rather spend our time researching stocks that hedge funds are piling on. Our calculations showed that top 20 most popular stocks among hedge funds returned 24.4% in 2019 through September 30th and outperformed the S&P 500 ETF (SPY) by 4 percentage points. Unfortunately DB wasn’t nearly as popular as these 20 stocks (hedge fund sentiment was quite bearish); DB investors were disappointed as the stock returned -1.7% during the third quarter and underperformed the market. If you are interested in investing in large cap stocks with huge upside potential, you should check out the top 20 most popular stocks among hedge funds as many of these stocks already outperformed the market so far in 2019.