We are still in an overall bull market and many stocks that smart money investors were piling into surged through October 17th. Among them, Facebook and Microsoft ranked among the top 3 picks and these stocks gained 45% and 39% respectively. Hedge funds’ top 3 stock picks returned 34.4% this year and beat the S&P 500 ETFs by 13 percentage points. Investing in index funds guarantees you average returns, not superior returns. We are looking to generate superior returns for our readers. That’s why we believe it isn’t a waste of time to check out hedge fund sentiment before you invest in a stock like Buckeye Partners, L.P. (NYSE:BPL).

Buckeye Partners, L.P. (NYSE:BPL) has experienced an increase in hedge fund sentiment recently. BPL was in 13 hedge funds’ portfolios at the end of the second quarter of 2019. There were 5 hedge funds in our database with BPL holdings at the end of the previous quarter. Our calculations also showed that BPL isn’t among the 30 most popular stocks among hedge funds (view the video below).

To most stock holders, hedge funds are seen as worthless, outdated financial vehicles of years past. While there are over 8000 funds in operation at present, We hone in on the bigwigs of this group, around 750 funds. These money managers administer the majority of the smart money’s total capital, and by following their matchless equity investments, Insider Monkey has come up with a number of investment strategies that have historically outpaced the market. Insider Monkey’s flagship hedge fund strategy outstripped the S&P 500 index by around 5 percentage points per annum since its inception in May 2014. We were able to generate large returns even by identifying short candidates. Our portfolio of short stocks lost 25.7% since February 2017 (through September 30th) even though the market was up more than 33% during the same period. We just shared a list of 10 short targets in our latest quarterly update .

What have hedge funds been doing with Buckeye Partners, L.P. (NYSE:BPL)? 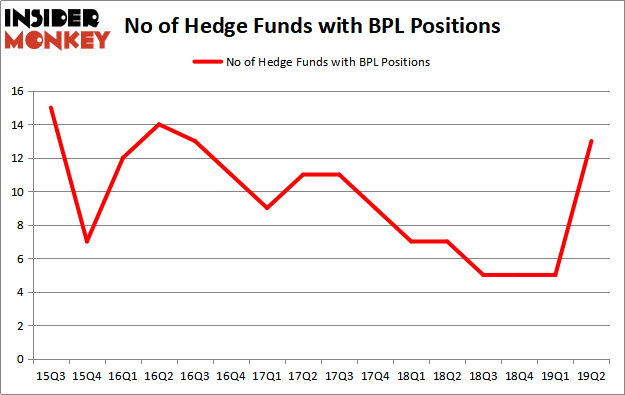 Among these funds, Water Island Capital held the most valuable stake in Buckeye Partners, L.P. (NYSE:BPL), which was worth $30.4 million at the end of the second quarter. On the second spot was Maso Capital which amassed $26.8 million worth of shares. Moreover, LMR Partners, Beryl Capital Management, and Perella Weinberg Partners were also bullish on Buckeye Partners, L.P. (NYSE:BPL), allocating a large percentage of their portfolios to this stock.

As you can see these stocks had an average of 23.25 hedge funds with bullish positions and the average amount invested in these stocks was $641 million. That figure was $166 million in BPL’s case. GCI Liberty, Inc. (NASDAQ:GLIBA) is the most popular stock in this table. On the other hand Logitech International SA (NASDAQ:LOGI) is the least popular one with only 16 bullish hedge fund positions. Compared to these stocks Buckeye Partners, L.P. (NYSE:BPL) is even less popular than LOGI. Our calculations showed that top 20 most popular stocks among hedge funds returned 24.4% in 2019 through September 30th and outperformed the S&P 500 ETF (SPY) by 4 percentage points. A small number of hedge funds were also right about betting on BPL, though not to the same extent, as the stock returned 1.9% during the third quarter and outperformed the market as well.