Looking for stocks with high upside potential? Just follow the big players within the hedge fund industry. Why should you do so? Let’s take a brief look at what statistics have to say about hedge funds’ stock picking abilities to illustrate. The Standard and Poor’s 500 Index returned approximately 5.7% in the 12 months ending October 26 (including dividend payments). Conversely, hedge funds’ 30 preferred S&P 500 stocks (as of June 2014) generated a return of 15.1% during the same 12-month period, with 53% of these stock picks outperforming the broader market benchmark. Coincidence? It might happen to be so, but it is unlikely. Our research covering the last 18 years indicates that hedge funds’ stock picks generate superior risk-adjusted returns. That’s why we believe it is wise to check hedge fund activity before you invest your time or your savings on a stock like Automatic Data Processing, Inc. (NASDAQ:ADP).

So, is Automatic Data Processing, Inc. (NASDAQ:ADP) a first-rate investment now? The smart money is reducing their bets on the stock. The number of bullish hedge fund bets shrunk by 7 recently to 35 investors with long positions at the end of the third quarter. Not only that the stock is losing enthusiasm from smart money investors in our database, the billionaires in our system also don’t consider it a favorite (if you want to see what stocks billionaires have been piling on, check out the list of 30 stocks billionaires are crazy about: Insider Monkey billionaire stock index). But the story about Automatic Data Processing, Inc. doesn’t end here, and we’ll carefully consider it in the rest of this article.

According to most traders, hedge funds are viewed as underperforming, outdated investment tools of yesteryear. While there are more than 8000 funds with their doors open today, Our researchers hone in on the crème de la crème of this club, about 700 funds. These money managers watch over bulk of all hedge funds’ total asset base, and by observing their unrivaled picks, Insider Monkey has figured out several investment strategies that have historically outrun the S&P 500 index. Insider Monkey’s small-cap hedge fund strategy outstripped the S&P 500 index by 12 percentage points per annum for a decade in their back tests.

Even though Automatic Data Processing, Inc. (NASDAQ:ADP) is not one of the stocks most popular with billionaires, that doesn’t mean there isn’t a single billionaire who is bullish on it. In order to make a thorough analysis of the company we tracked what billionaire Bill Ackman thinks of it, and here is what he wrote in his most recent investor letter:

“ADP’s total return was 13% during the third quarter, including dividends, as the market positively responded to ADP’s June analyst day and fiscal 2019 guidance. We concluded our ADP proxy campaign just over a year ago and believe that the company’s progress following the campaign indicates that ADP is in the early innings of a long-term transformation. At the end of October, ADP reported fiscal first quarter 2019 results and positively updated its FY 2019 guidance. Fiscal first quarter results provided an early validation of the transformation underway at ADP as organic revenue growth accelerated and margins increased at Employer Services following actions taken by management earlier this calendar year. We are also encouraged that management noted on its first quarter earnings call that it is embracing ADP’s “transformation from a service company supported by technology to a technology company that offers great service” [Emphasis added].4

In response to the better-than-anticipated first quarter performance, ADP updated FY 2019 Adjusted EPS to $5.20 to $5.30 per share. At present, ADP trades at ~25 times our estimate of ADP’s next-twelve- month of earnings, which continue to significantly understate the company’s earnings power if operated optimally. As discussed previously in our June 20th investor letter, we believe there is clear line of sight for ADP to achieve more than $7 of EPS by FY 2021 (which begins less than 20 months from now on July 1, 2020) and for future accelerated progress thereafter. We anticipate further share price appreciation from current levels as ADP’s business transformation takes hold. Furthermore, we believe ADP’s US- centric business model (~85% of profits are generated in the United States) – which benefits from rising interest rates due to the large amount of float it receives from its clients and unleveraged balance sheet – should enable the company to perform well in the current market environment.

Despite some recent volatility which saw ADP shares modestly retreat in the month of October amidst the broader market decline, ADP shares have appreciated 25% year-to-date. We believe there continue to be a number of catalysts for short and long-term value creation at the company. Notably, investors continue to await further clarity on who will become ADP’s new CFO. We believe that the hiring of a new CFO with technology experience and operational expertise in executing business transformations would be well received by shareholders.”

If you are interested to read more about Bil Ackman’s recent investment moves take a look at this article – Pershing Square 2018 Q3 investor letter: the latest on every Bill Ackman stock pick.

So, what does the smart money think about Automatic Data Processing, Inc. (NASDAQ:ADP)?

At Q3’s end, a total of 35 of the hedge funds tracked by Insider Monkey were long this stock, a change of -17% from one quarter earlier. On the other hand, there were a total of 44 hedge funds with a bullish position in ADP at the beginning of this year. With hedge funds’ sentiment swirling, there exists a select group of key hedge fund managers who were upping their holdings substantially (or already accumulated large positions). 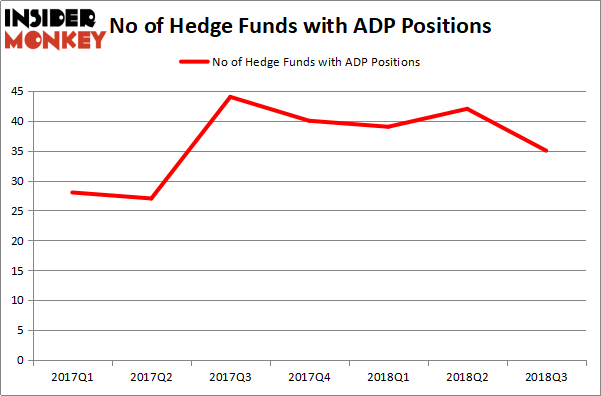 Seeing as Automatic Data Processing, Inc. (NASDAQ:ADP) has faced falling interest from the aggregate hedge fund industry, we can see that there lies a certain “tier” of hedge funds that decided to sell off their entire stakes heading into Q3. It’s worth mentioning that Scott Ferguson’s Sachem Head Capital said goodbye to the largest investment of the “upper crust” of funds watched by Insider Monkey, valued at an estimated $67.1 million in stock. Robert Pohly’s fund, Samlyn Capital, also dropped its stock, about $36.1 million worth. These transactions are intriguing to say the least, as total hedge fund interest dropped by 7 funds heading into Q3.

As you can see these stocks had an average of 35 hedge funds with bullish positions and the average amount invested in these stocks was $2.53 billion. That figure was $3.94 billion in ADP’s case. Allergan plc (NYSE:AGN) is the most popular stock in this table. On the other hand Banco Santander (Brasil) SA (ADR) (NYSE:BSBR) is the least popular one with only 7 bullish hedge fund positions. Automatic Data Processing, Inc. (NASDAQ:ADP) is not the most popular stock in this group but hedge fund interest is still above average. This is a slightly positive signal but we’d rather spend our time researching stocks that hedge funds are piling on. In this regard AGN might be a better candidate to consider a long position.

Already Up 48% in 2018, Bill Ackman Sees Bigger Gains Ahead for Chipotle Mexican...

Is Agilent Technologies Inc. (NYSE:A) A Good Stock To Buy?