Is Ameris Bancorp (ABCB) A Good Stock To Buy?

We know that hedge funds generate strong, risk-adjusted returns over the long run, therefore imitating the picks that they are collectively bullish on can be a profitable strategy for retail investors. With billions of dollars in assets, smart money investors have to conduct complex analyses, spend many resources and use tools that are not always available for the general crowd. This doesn’t mean that they don’t have occasional colossal losses; they do (like Peltz’s recent General Electric losses). However, it is still a good idea to keep an eye on hedge fund activity. With this in mind, as the current round of 13F filings has just ended, let’s examine the smart money sentiment towards Ameris Bancorp (NASDAQ:ABCB).

Is Ameris Bancorp (NASDAQ:ABCB) a sound investment now? The smart money is taking a pessimistic view. The number of long hedge fund bets retreated by 2 recently. Our calculations also showed that ABCB isn’t among the 30 most popular stocks among hedge funds (click for Q3 rankings and see the video below for Q2 rankings).

We leave no stone unturned when looking for the next great investment idea. For example Europe is set to become the world’s largest cannabis market, so we check out this European marijuana stock pitch. One of the most bullish analysts in America just put his money where his mouth is. He says, “I’m investing more today than I did back in early 2009.” So we check out his pitch. We read hedge fund investor letters and listen to stock pitches at hedge fund conferences. We also rely on the best performing hedge funds‘ buy/sell signals. Let’s take a peek at the new hedge fund action surrounding Ameris Bancorp (NASDAQ:ABCB).

What does smart money think about Ameris Bancorp (NASDAQ:ABCB)? 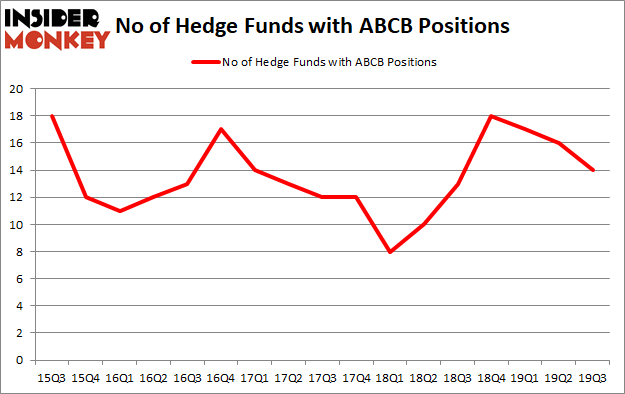 Judging by the fact that Ameris Bancorp (NASDAQ:ABCB) has experienced a decline in interest from the smart money, it’s easy to see that there exists a select few hedge funds who sold off their full holdings in the third quarter. Interestingly, Paul Marshall and Ian Wace’s Marshall Wace dropped the largest investment of the “upper crust” of funds tracked by Insider Monkey, comprising about $5.6 million in stock, and Daniel Johnson’s Gillson Capital was right behind this move, as the fund dumped about $4.8 million worth. These bearish behaviors are important to note, as total hedge fund interest dropped by 2 funds in the third quarter.

As you can see these stocks had an average of 17.25 hedge funds with bullish positions and the average amount invested in these stocks was $354 million. That figure was $144 million in ABCB’s case. Navistar International Corp (NYSE:NAV) is the most popular stock in this table. On the other hand American Assets Trust, Inc (NYSE:AAT) is the least popular one with only 11 bullish hedge fund positions. Ameris Bancorp (NASDAQ:ABCB) is not the least popular stock in this group but hedge fund interest is still below average. Our calculations showed that top 20 most popular stocks among hedge funds returned 37.4% in 2019 through the end of November and outperformed the S&P 500 ETF (SPY) by 9.9 percentage points. A small number of hedge funds were also right about betting on ABCB, though not to the same extent, as the stock returned 8.5% during the first two months of the fourth quarter and outperformed the market.