Is Aetna Inc. (AET) A Good Stock To Buy?

Legendary investors such as Leon Cooperman and Seth Klarman earn enormous amounts of money for themselves and their investors by doing in-depth research on small-cap stocks that big brokerage houses don’t publish. Small cap stocks -especially when they are screened well- can generate substantial outperformance versus a boring index fund. That’s why we analyze the activity of those elite funds in these small-cap stocks. In the following paragraphs, we analyze Aetna Inc. (NYSE:AET) from the perspective of those elite funds.

If you’d ask most market participants, hedge funds are seen as slow, old investment tools of yesteryear. While there are greater than 8000 funds in operation at the moment, We choose to focus on the upper echelon of this group, approximately 700 funds. These investment experts watch over bulk of the hedge fund industry’s total asset base, and by tailing their matchless stock picks, Insider Monkey has formulated many investment strategies that have historically outstripped the broader indices. Insider Monkey’s flagship best performing hedge funds strategy returned 17.4% year to date and outperformed the market by more than 14 percentage points this year. This strategy also outperformed the market by 3 percentage points in the fourth quarter despite the market volatility (see the details here).

At the end of the third quarter, a total of 69 of the hedge funds tracked by Insider Monkey were long this stock, a change of -8% from the second quarter of 2018. The graph below displays the number of hedge funds with bullish position in AET over the last 6 quarters. With hedgies’ capital changing hands, there exists an “upper tier” of noteworthy hedge fund managers who were increasing their stakes considerably (or already accumulated large positions). 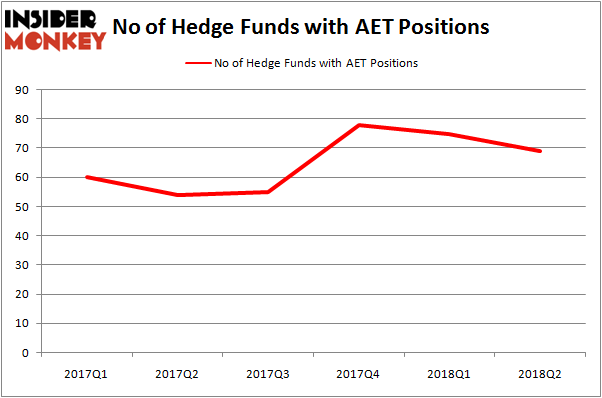 Because Aetna Inc. (NYSE:AET) has faced bearish sentiment from the aggregate hedge fund industry, logic holds that there lies a certain “tier” of fund managers that elected to cut their full holdings in the second quarter. Intriguingly, Josh Donfeld and David Rogers’s Castle Hook Partners sold off the largest position of the 700 funds monitored by Insider Monkey, comprising about $78.6 million in stock. Shane Finemore’s fund, Manikay Partners, also sold off its stock, about $65.6 million worth. These moves are intriguing to say the least, as total hedge fund interest dropped by 6 funds in the second quarter.

As you can see these stocks had an average of 30.25 hedge funds with bullish positions and the average amount invested in these stocks was $2005 million. That figure was $9689 million in AET’s case. Walgreens Boots Alliance Inc (NASDAQ:WBA) is the most popular stock in this table. On the other hand Lloyds Banking Group PLC (ADR) (NYSE:LYG) is the least popular one with only 6 bullish hedge fund positions. Compared to these stocks Aetna Inc. (NYSE:AET) is more popular among hedge funds. Considering that hedge funds are fond of this stock in relation to its market cap peers, it may be a good idea to analyze it in detail and potentially include it in your portfolio.