How Did VICI Properties Inc. (VICI) Compare Against Hedge Fund Darlings in 2019?

We are still in an overall bull market and many stocks that smart money investors were piling into surged in 2019. Among them, Facebook and Microsoft ranked among the top 3 picks and these stocks gained more than 57% each. Hedge funds’ top 3 stock picks returned 44.6% in 2019 and beat the S&P 500 ETFs by almost 14 percentage points. That’s a big deal. This is why following the smart money sentiment is a useful tool at identifying the next stock to invest in.

Is VICI Properties Inc. (NYSE:VICI) the right pick for your portfolio? Prominent investors are in a pessimistic mood. The number of bullish hedge fund bets dropped by 22 lately. Our calculations also showed that VICI isn’t among the 30 most popular stocks among hedge funds (click for Q3 rankings and see the video at the end of this article for Q2 rankings).

We leave no stone unturned when looking for the next great investment idea. For example Europe is set to become the world’s largest cannabis market, so we check out this European marijuana stock pitch. We read hedge fund investor letters and listen to stock pitches at hedge fund conferences. This December, we recommended Adams Energy as a one-way bet based on an under-the-radar fund manager’s investor letter and the stock is still extremely cheap despite already gaining 20 percent. Now let’s take a peek at the new hedge fund action regarding VICI Properties Inc. (NYSE:VICI).

What have hedge funds been doing with VICI Properties Inc. (NYSE:VICI)? 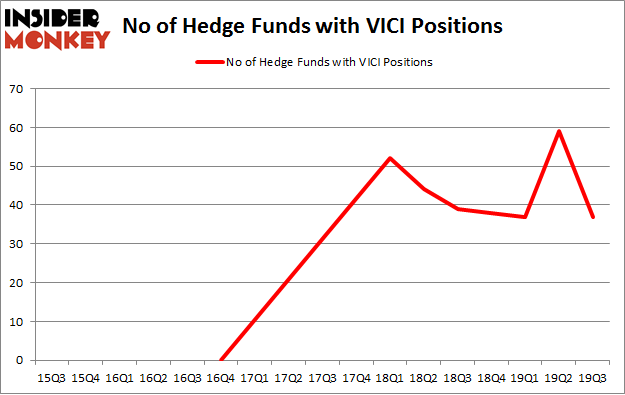 Among these funds, Canyon Capital Advisors held the most valuable stake in VICI Properties Inc. (NYSE:VICI), which was worth $507.4 million at the end of the third quarter. On the second spot was Soros Fund Management which amassed $419.8 million worth of shares. Senator Investment Group, Citadel Investment Group, and Point72 Asset Management were also very fond of the stock, becoming one of the largest hedge fund holders of the company. In terms of the portfolio weights assigned to each position Soros Fund Management allocated the biggest weight to VICI Properties Inc. (NYSE:VICI), around 11.63% of its 13F portfolio. Canyon Capital Advisors is also relatively very bullish on the stock, dishing out 10.95 percent of its 13F equity portfolio to VICI.

Due to the fact that VICI Properties Inc. (NYSE:VICI) has faced declining sentiment from the smart money, it’s safe to say that there lies a certain “tier” of funds that elected to cut their full holdings heading into Q4. Intriguingly, Stuart J. Zimmer’s Zimmer Partners dumped the biggest position of all the hedgies followed by Insider Monkey, totaling about $90.9 million in stock, and Jeffrey Furber’s AEW Capital Management was right behind this move, as the fund cut about $74.8 million worth. These transactions are important to note, as aggregate hedge fund interest fell by 22 funds heading into Q4.

As you can see these stocks had an average of 33.25 hedge funds with bullish positions and the average amount invested in these stocks was $1328 million. That figure was $2263 million in VICI’s case. RingCentral Inc (NYSE:RNG) is the most popular stock in this table. On the other hand Federal Realty Investment Trust (NYSE:FRT) is the least popular one with only 22 bullish hedge fund positions. VICI Properties Inc. (NYSE:VICI) is not the most popular stock in this group but hedge fund interest is still above average. Our calculations showed that top 20 most popular stocks among hedge funds returned 41.3% in 2019 and outperformed the S&P 500 ETF (SPY) by 10.1 percentage points. Hedge funds were also right about betting on VICI as the stock returned 43.2% in 2019 and outperformed the market. Hedge funds were rewarded for their relative bullishness.