How do you pick the next stock to invest in? One way would be to spend hours of research browsing through thousands of publicly traded companies. However, an easier way is to look at the stocks that smart money investors are collectively bullish on. Hedge funds and other institutional investors usually invest large amounts of capital and have to conduct due diligence while choosing their next pick. They don’t always get it right, but, on average, their stock picks historically generated strong returns after adjusting for known risk factors. With this in mind, let’s take a look at the recent hedge fund activity surrounding VICI Properties Inc. (NYSE:VICI).

Is VICI Properties Inc. (NYSE:VICI) a worthy investment now? Prominent investors are taking a pessimistic view. The number of bullish hedge fund bets dropped by 1 recently. Our calculations also showed that VICI isn’t among the 30 most popular stocks among hedge funds. VICI was in 38 hedge funds’ portfolios at the end of the fourth quarter of 2018. There were 39 hedge funds in our database with VICI positions at the end of the previous quarter.

In today’s marketplace there are several metrics investors put to use to appraise publicly traded companies. A pair of the most innovative metrics are hedge fund and insider trading activity. Our experts have shown that, historically, those who follow the best picks of the elite hedge fund managers can outclass their index-focused peers by a solid amount (see the details here).

How have hedgies been trading VICI Properties Inc. (NYSE:VICI)?

Heading into the first quarter of 2019, a total of 38 of the hedge funds tracked by Insider Monkey held long positions in this stock, a change of -3% from one quarter earlier. Below, you can check out the change in hedge fund sentiment towards VICI over the last 14 quarters. With the smart money’s sentiment swirling, there exists an “upper tier” of noteworthy hedge fund managers who were boosting their holdings meaningfully (or already accumulated large positions). 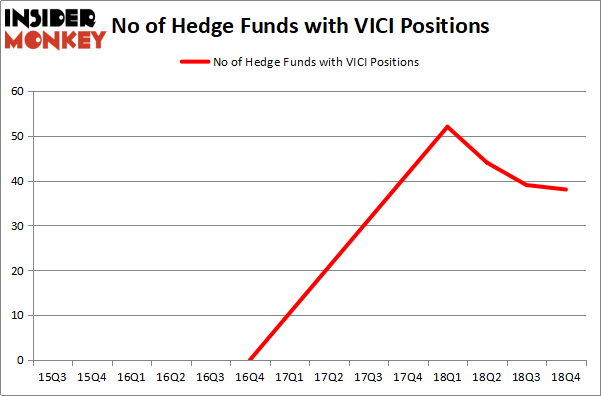 More specifically, Canyon Capital Advisors was the largest shareholder of VICI Properties Inc. (NYSE:VICI), with a stake worth $606.4 million reported as of the end of September. Trailing Canyon Capital Advisors was Soros Fund Management, which amassed a stake valued at $392.5 million. OZ Management, Monarch Alternative Capital, and Silver Point Capital were also very fond of the stock, giving the stock large weights in their portfolios.

Due to the fact that VICI Properties Inc. (NYSE:VICI) has faced a decline in interest from the entirety of the hedge funds we track, it’s safe to say that there is a sect of funds who sold off their full holdings heading into Q3. Interestingly, Christopher Pucillo’s Solus Alternative Asset Management dropped the largest position of all the hedgies tracked by Insider Monkey, valued at close to $59.3 million in stock. Carl Goldsmith and Scott Klein’s fund, Beach Point Capital Management, also cut its stock, about $5.8 million worth. These moves are intriguing to say the least, as aggregate hedge fund interest dropped by 1 funds heading into Q3.

Let’s go over hedge fund activity in other stocks – not necessarily in the same industry as VICI Properties Inc. (NYSE:VICI) but similarly valued. We will take a look at Qorvo Inc (NASDAQ:QRVO), Allegion plc (NYSE:ALLE), The Western Union Company (NYSE:WU), and LKQ Corporation (NASDAQ:LKQ). This group of stocks’ market caps are similar to VICI’s market cap.

As you can see these stocks had an average of 29.75 hedge funds with bullish positions and the average amount invested in these stocks was $773 million. That figure was $2269 million in VICI’s case. LKQ Corporation (NASDAQ:LKQ) is the most popular stock in this table. On the other hand Allegion plc (NYSE:ALLE) is the least popular one with only 25 bullish hedge fund positions. VICI Properties Inc. (NYSE:VICI) is not the most popular stock in this group but hedge fund interest is still above average. Our calculations showed that the top 15 most popular stocks among hedge funds returned 21.3% year-to-date  through April 8th and outperformed the S&P 500 ETF (SPY) by more than 5 percentage points. Hedge funds were also right about betting on VICI, though not to the same extent, as the stock returned 19.1% and outperformed the market as well.