VICI Properties Inc. (NYSE:VICI) investors should pay attention to a decrease in support from the world’s most elite money managers recently. Our calculations also showed that VICI isn’t among the 30 most popular stocks among hedge funds.

To most traders, hedge funds are seen as underperforming, outdated financial vehicles of years past. While there are greater than 8,000 funds in operation at the moment, Our experts look at the masters of this club, about 700 funds. These investment experts oversee the lion’s share of all hedge funds’ total capital, and by shadowing their best picks, Insider Monkey has discovered many investment strategies that have historically defeated the market. Insider Monkey’s flagship hedge fund strategy outpaced the S&P 500 index by 6 percentage points per year since its inception in May 2014 through early November 2018. We were able to generate large returns even by identifying short candidates. Our portfolio of short stocks lost 24% since February 2017 (through December 3rd) even though the market was up nearly 23% during the same period. We just shared a list of 11 short targets in our latest quarterly update.

What does the smart money think about VICI Properties Inc. (NYSE:VICI)? 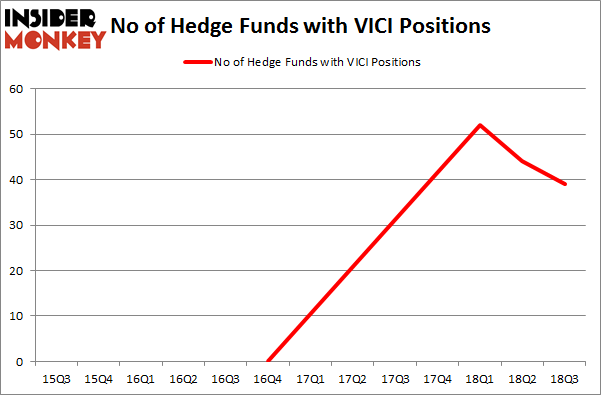 When looking at the institutional investors followed by Insider Monkey, Joshua Friedman and Mitchell Julis’s Canyon Capital Advisors has the biggest position in VICI Properties Inc. (NYSE:VICI), worth close to $964.2 million, accounting for 13.1% of its total 13F portfolio. The second most bullish fund manager is Soros Fund Management, managed by George Soros, which holds a $464.8 million position; the fund has 10.2% of its 13F portfolio invested in the stock. Some other members of the smart money that hold long positions contain Michael Weinstock’s Monarch Alternative Capital, Doug Silverman and Alexander Klabin’s Senator Investment Group and Edward A. Mule’s Silver Point Capital.

Judging by the fact that VICI Properties Inc. (NYSE:VICI) has witnessed a decline in interest from the aggregate hedge fund industry, it’s safe to say that there exists a select few hedgies that elected to cut their full holdings last quarter. Interestingly, Mark T. Gallogly’s Centerbridge Partners cut the biggest position of the 700 funds followed by Insider Monkey, totaling an estimated $49.2 million in stock, and John Khoury’s Long Pond Capital was right behind this move, as the fund dropped about $39 million worth. These transactions are interesting, as aggregate hedge fund interest was cut by 5 funds last quarter.

As you can see these stocks had an average of 22.75 hedge funds with bullish positions and the average amount invested in these stocks was $670 million. That figure was $3.56 billion in VICI’s case. Voya Financial Inc (NYSE:VOYA) is the most popular stock in this table. On the other hand Micro Focus Intl PLC (NYSE:MFGP) is the least popular one with only 10 bullish hedge fund positions. Compared to these stocks VICI Properties Inc. (NYSE:VICI) is more popular among hedge funds. Considering that hedge funds are fond of this stock in relation to its market cap peers, it may be a good idea to analyze it in detail and potentially include it in your portfolio.