The market has been volatile in the fourth quarter as the Federal Reserve continued its rate hikes to normalize the interest rates. Small cap stocks have been hit hard as a result, as the Russell 2000 ETF (IWM) has underperformed the larger S&P 500 ETF (SPY) by nearly 7 percentage points. SEC filings and hedge fund investor letters indicate that the smart money seems to be paring back their overall long exposure since summer months, and the funds’ movements is one of the reasons why the major indexes have retraced. In this article, we analyze what the smart money thinks of The Sherwin-Williams Company (NYSE:SHW) and find out how it is affected by hedge funds’ moves.

The Sherwin-Williams Company (NYSE:SHW) was in 50 hedge funds’ portfolios at the end of December. SHW has experienced an increase in activity from the world’s largest hedge funds in recent months. There were 38 hedge funds in our database with SHW holdings at the end of the previous quarter. Our calculations also showed that SHW isn’t among the 30 most popular stocks among hedge funds. 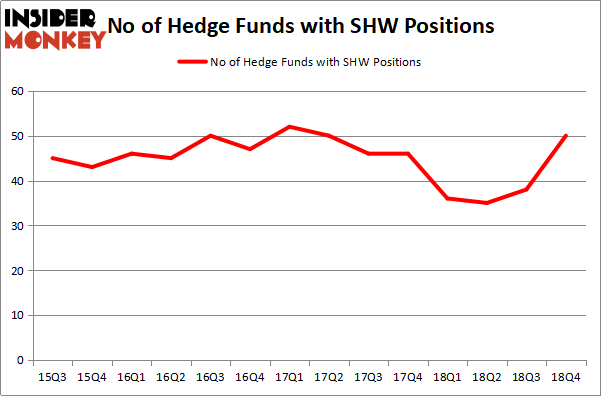 More specifically, D1 Capital Partners was the largest shareholder of The Sherwin-Williams Company (NYSE:SHW), with a stake worth $238 million reported as of the end of September. Trailing D1 Capital Partners was Citadel Investment Group, which amassed a stake valued at $233.5 million. Chilton Investment Company, Millennium Management, and Iridian Asset Management were also very fond of the stock, giving the stock large weights in their portfolios.

Consequently, some big names were breaking ground themselves. D1 Capital Partners, managed by Daniel Sundheim, initiated the largest position in The Sherwin-Williams Company (NYSE:SHW). D1 Capital Partners had $238 million invested in the company at the end of the quarter. Daniel S. Och’s OZ Management also made a $118.2 million investment in the stock during the quarter. The other funds with brand new SHW positions are Phill Gross and Robert Atchinson’s Adage Capital Management, Andrew Immerman and Jeremy Schiffman’s Palestra Capital Management, and John Khoury’s Long Pond Capital.

As you can see these stocks had an average of 34.75 hedge funds with bullish positions and the average amount invested in these stocks was $1251 million. That figure was $1977 million in SHW’s case. Capital One Financial Corp. (NYSE:COF) is the most popular stock in this table. On the other hand Keurig Dr Pepper Inc. (NASDAQ:KDP) is the least popular one with only 21 bullish hedge fund positions. Compared to these stocks The Sherwin-Williams Company (NYSE:SHW) is more popular among hedge funds. Considering that hedge funds are fond of this stock in relation to its market cap peers, it may be a good idea to analyze it in detail and potentially include it in your portfolio. Our calculations showed that top 15 most popular stocks among hedge funds returned 19.7% through March 15th and outperformed the S&P 500 ETF (SPY) by 6.6 percentage points. Unfortunately SHW wasn’t in this group. Hedge funds that bet on SHW were disappointed as the stock returned 9.8% and underperformed the market. If you are interested in investing in large cap stocks, you should check out the top 15 hedge fund stocks as 13 of these outperformed the market.