Published on October 20, 2016 at 3:53 pm by Sure Dividend in Dividend Stocks, News, Stock Analysis

Sherwin-Williams Co (NYSE:SHW) is the North American leader in paint and coatings. The company’s ‘Cover the Earth’ logo is instantly recognizable for many.

But what you might not know is that Sherwin-Williams’ history as a company goes all the way back to 1866, when Henry A. Sherwin became a partner in a tiny paint and brush company called Truman, Dunham & Company.

Unfortunately, the partnership dissolved. But soon after, Sherwin met Edward Porter Williams, who worked as a supplier to Truman, Dunham, & Company, and the pair decided to go into business together. They formed Sherwin, Williams & Company in 1870. Sherwin-Williams was incorporated in 1884, and the rest is history.

The company now employs approximately 58,000 people and has operations in more than 115 countries worldwide.  The company really does ‘cover the earth’ based on its global operations…

But it has done more than that; it has also lined investor’s pockets (or rather, brokerage accounts). The image below shows Sherwin-William’s performance over the last decade. 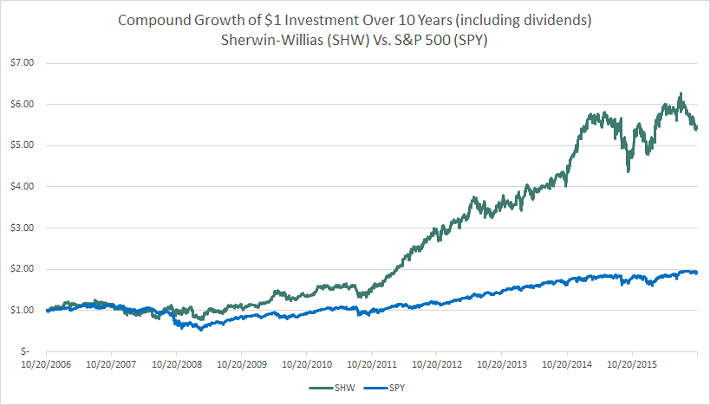 The company is an established business. Sherwin-Williams is a Dividend Aristocrat thanks to its 37 years of consecutive dividend increases.

Keep reading this article to learn more about the investment prospects of Sherwin-Williams.

Last year, Sherwin-Williams’ sales topped $11 billion. This shows how successful the business has been over its many decades of existence. Today, Sherwin-Williams is split up into four main business categories:

The Paint Stores business is by far the most important one for Sherwin Williams. It owns and operates more than 4,100 stores. 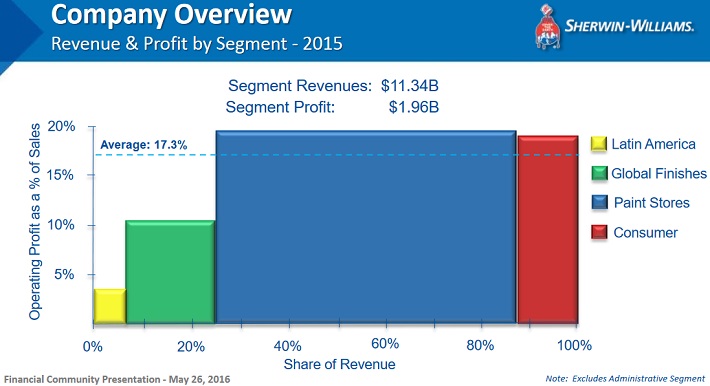