Hedge funds and large money managers usually invest with a focus on the long-term horizon and, therefore, short-lived dips on the charts, usually don’t make them change their opinion towards a company. This time it may be different. During the fourth quarter of 2018 we observed increased volatility and small-cap stocks underperformed the market. Hedge fund investor letters indicated that they are cutting their overall exposure, closing out some position and doubling down on others. Let’s take a look at the hedge fund sentiment towards LogMeIn Inc (NASDAQ:LOGM) to find out whether it was one of their high conviction long-term ideas.

Is LogMeIn Inc (NASDAQ:LOGM) ready to rally soon? The best stock pickers are becoming less hopeful. The number of long hedge fund positions were cut by 1 lately. Our calculations also showed that LOGM isn’t among the 30 most popular stocks among hedge funds. LOGM was in 28 hedge funds’ portfolios at the end of the fourth quarter of 2018. There were 29 hedge funds in our database with LOGM holdings at the end of the previous quarter.

At Q4’s end, a total of 28 of the hedge funds tracked by Insider Monkey were long this stock, a change of -3% from the second quarter of 2018. The graph below displays the number of hedge funds with bullish position in LOGM over the last 14 quarters. With hedge funds’ capital changing hands, there exists an “upper tier” of noteworthy hedge fund managers who were boosting their stakes significantly (or already accumulated large positions). 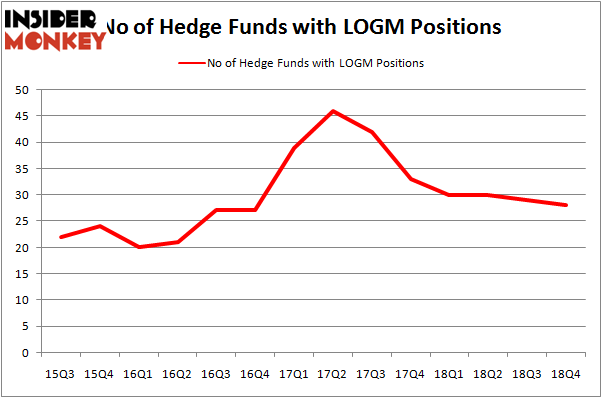 Of the funds tracked by Insider Monkey, Alyeska Investment Group, managed by Anand Parekh, holds the largest position in LogMeIn Inc (NASDAQ:LOGM). Alyeska Investment Group has a $132.4 million position in the stock, comprising 2% of its 13F portfolio. Coming in second is Paul Singer of Elliott Management, with a $97.9 million position; the fund has 0.7% of its 13F portfolio invested in the stock. Other members of the smart money that hold long positions comprise Jim Simons’s Renaissance Technologies, Michael Doheny’s Freshford Capital Management and Peter S. Park’s Park West Asset Management.

Because LogMeIn Inc (NASDAQ:LOGM) has faced declining sentiment from the smart money, we can see that there is a sect of hedge funds that elected to cut their entire stakes by the end of the third quarter. At the top of the heap, Joshua Kaufman and Craig Nerenberg’s Brenner West Capital Partners sold off the biggest stake of the 700 funds tracked by Insider Monkey, worth close to $35.1 million in stock. Benjamin A. Smith’s fund, Laurion Capital Management, also dropped its stock, about $21.7 million worth. These bearish behaviors are intriguing to say the least, as aggregate hedge fund interest dropped by 1 funds by the end of the third quarter.

Let’s go over hedge fund activity in other stocks – not necessarily in the same industry as LogMeIn Inc (NASDAQ:LOGM) but similarly valued. These stocks are MAXIMUS, Inc. (NYSE:MMS), AECOM (NYSE:ACM), Seaboard Corporation (NYSE:SEB), and SYNNEX Corporation (NYSE:SNX). This group of stocks’ market caps are similar to LOGM’s market cap.