While the market driven by short-term sentiment influenced by uncertainty regarding the future of the interest rate environment in the US, declining oil prices and the trade war with China, many smart money investors kept their optimism regarding the current bull run in the fourth quarter, while still hedging many of their long positions. However, as we know, big investors usually buy stocks with strong fundamentals, which is why we believe we can profit from imitating them. In this article, we are going to take a look at the smart money sentiment surrounding Intercept Pharmaceuticals Inc (NASDAQ:ICPT).

Is Intercept Pharmaceuticals Inc (NASDAQ:ICPT) a buy right now? The best stock pickers are in an optimistic mood. The number of long hedge fund bets increased by 2 lately. Our calculations also showed that ICPT isn’t among the 30 most popular stocks among hedge funds. ICPT was in 21 hedge funds’ portfolios at the end of December. There were 19 hedge funds in our database with ICPT holdings at the end of the previous quarter. 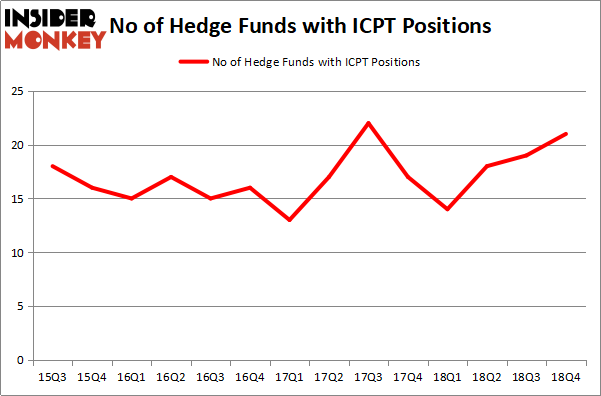 Among these funds, Laurion Capital Management held the most valuable stake in Intercept Pharmaceuticals Inc (NASDAQ:ICPT), which was worth $24.1 million at the end of the third quarter. On the second spot was Samsara BioCapital which amassed $23.6 million worth of shares. Moreover, D E Shaw, Citadel Investment Group, and Adage Capital Management were also bullish on Intercept Pharmaceuticals Inc (NASDAQ:ICPT), allocating a large percentage of their portfolios to this stock.

With a general bullishness amongst the heavyweights, some big names were breaking ground themselves. Laurion Capital Management, managed by Benjamin A. Smith, created the largest position in Intercept Pharmaceuticals Inc (NASDAQ:ICPT). Laurion Capital Management had $24.1 million invested in the company at the end of the quarter. Srini Akkaraju and Michael Dybbs’s Samsara BioCapital also made a $23.6 million investment in the stock during the quarter. The other funds with new positions in the stock are Phill Gross and Robert Atchinson’s Adage Capital Management, Steve Cohen’s Point72 Asset Management, and Samuel Isaly’s OrbiMed Advisors.

As you can see these stocks had an average of 16 hedge funds with bullish positions and the average amount invested in these stocks was $222 million. That figure was $151 million in ICPT’s case. International Game Technology PLC (NYSE:IGT) is the most popular stock in this table. On the other hand China Biologic Products Inc (NASDAQ:CBPO) is the least popular one with only 7 bullish hedge fund positions. Intercept Pharmaceuticals Inc (NASDAQ:ICPT) is not the most popular stock in this group but hedge fund interest is still above average. This is a slightly positive signal but we’d rather spend our time researching stocks that hedge funds are piling on. Our calculations showed that top 15 most popular stocks) among hedge funds returned 24.2% through April 22nd and outperformed the S&P 500 ETF (SPY) by more than 7 percentage points. Unfortunately ICPT wasn’t nearly as popular as these 15 stock and hedge funds that were betting on ICPT were disappointed as the stock returned -13.7% and underperformed the market. If you are interested in investing in large cap stocks with huge upside potential, you should check out the top 15 most popular stocks) among hedge funds as 13 of these stocks already outperformed the market this year.