How do you pick the next stock to invest in? One way would be to spend hours of research browsing through thousands of publicly traded companies. However, an easier way is to look at the stocks that smart money investors are collectively bullish on. Hedge funds and other institutional investors usually invest large amounts of capital and have to conduct due diligence while choosing their next pick. They don’t always get it right, but, on average, their stock picks historically generated strong returns after adjusting for known risk factors. With this in mind, let’s take a look at the recent hedge fund activity surrounding Graco Inc. (NYSE:GGG).

Hedge fund interest in Graco Inc. (NYSE:GGG) shares was flat at the end of last quarter. This is usually a negative indicator. The level and the change in hedge fund popularity aren’t the only variables you need to analyze to decipher hedge funds’ perspectives. A stock may witness a boost in popularity but it may still be less popular than similarly priced stocks. That’s why at the end of this article we will examine companies such as Black Knight, Inc. (NYSE:BKI), Jazz Pharmaceuticals plc (NASDAQ:JAZZ), and Booz Allen Hamilton Holding Corporation (NYSE:BAH) to gather more data points.

At the end of the first quarter, a total of 18 of the hedge funds tracked by Insider Monkey held long positions in this stock, a change of 0% from one quarter earlier. Below, you can check out the change in hedge fund sentiment towards GGG over the last 15 quarters. With hedgies’ capital changing hands, there exists a select group of noteworthy hedge fund managers who were upping their holdings meaningfully (or already accumulated large positions). 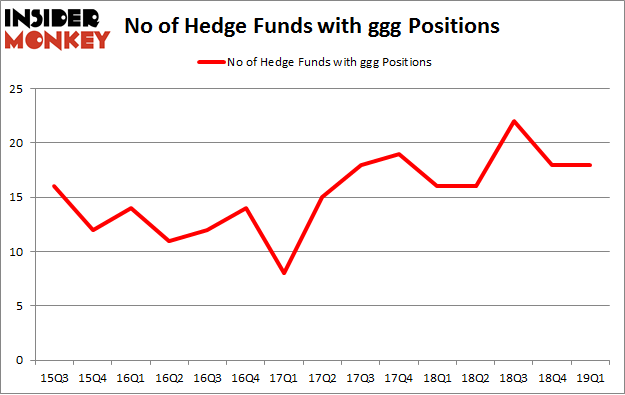 When looking at the institutional investors followed by Insider Monkey, GAMCO Investors, managed by Mario Gabelli, holds the largest position in Graco Inc. (NYSE:GGG). GAMCO Investors has a $116.6 million position in the stock, comprising 0.9% of its 13F portfolio. The second largest stake is held by GLG Partners, led by Noam Gottesman, holding a $22.5 million position; 0.1% of its 13F portfolio is allocated to the company. Some other members of the smart money that hold long positions consist of Chuck Royce’s Royce & Associates, D. E. Shaw’s D E Shaw and Ken Griffin’s Citadel Investment Group.

Because Graco Inc. (NYSE:GGG) has experienced declining sentiment from the smart money, logic holds that there was a specific group of fund managers that slashed their entire stakes by the end of the third quarter. Intriguingly, John Overdeck and David Siegel’s Two Sigma Advisors dropped the biggest investment of the 700 funds followed by Insider Monkey, comprising an estimated $1.4 million in stock, and Benjamin A. Smith’s Laurion Capital Management was right behind this move, as the fund sold off about $0.9 million worth. These transactions are interesting, as total hedge fund interest stayed the same (this is a bearish signal in our experience).

Let’s check out hedge fund activity in other stocks – not necessarily in the same industry as Graco Inc. (NYSE:GGG) but similarly valued. We will take a look at Black Knight, Inc. (NYSE:BKI), Jazz Pharmaceuticals plc (NASDAQ:JAZZ), Booz Allen Hamilton Holding Corporation (NYSE:BAH), and West Pharmaceutical Services Inc. (NYSE:WST). All of these stocks’ market caps are closest to GGG’s market cap.

As you can see these stocks had an average of 26.75 hedge funds with bullish positions and the average amount invested in these stocks was $571 million. That figure was $181 million in GGG’s case. Black Knight, Inc. (NYSE:BKI) is the most popular stock in this table. On the other hand Booz Allen Hamilton Holding Corporation (NYSE:BAH) is the least popular one with only 19 bullish hedge fund positions. Compared to these stocks Graco Inc. (NYSE:GGG) is even less popular than BAH. Hedge funds dodged a bullet by taking a bearish stance towards GGG. Our calculations showed that the top 15 most popular hedge fund stocks returned 1.9% in Q2 through May 30th and outperformed the S&P 500 ETF (SPY) by more than 3 percentage points. Unfortunately GGG wasn’t nearly as popular as these 20 stocks (hedge fund sentiment was very bearish); GGG investors were disappointed as the stock returned -3.4% during the same time frame and underperformed the market. If you are interested in investing in large cap stocks with huge upside potential, you should check out the top 20 most popular stocks among hedge funds as 13 of these stocks already outperformed the market so far in the second quarter.