Here is What Hedge Funds Think About Walmart Inc. (WMT)

The latest 13F reporting period has come and gone, and Insider Monkey is again at the forefront when it comes to making use of this gold mine of data. Insider Monkey finished processing more than 730 13F filings submitted by hedge funds and prominent investors. These filings show these funds’ portfolio positions as of June 28th, 2019. In this article we are going to take a look at smart money sentiment towards Walmart Inc. (NYSE:WMT).

Walmart Inc. (NYSE:WMT) was in 56 hedge funds’ portfolios at the end of June. WMT shareholders have witnessed a decrease in support from the world’s most elite money managers in recent months. There were 57 hedge funds in our database with WMT holdings at the end of the previous quarter. Our calculations also showed that wmt isn’t among the 30 most popular stocks among hedge funds.

In the 21st century investor’s toolkit there are numerous formulas investors employ to appraise their holdings. A pair of the less known formulas are hedge fund and insider trading signals. Our experts have shown that, historically, those who follow the best picks of the elite fund managers can outclass the market by a healthy amount (see the details here).

Unlike some fund managers who are betting on Dow reaching 40000 in a year, our long-short investment strategy doesn’t rely on bull markets to deliver double digit returns. We only rely on hedge fund buy/sell signals. We’re going to analyze the new hedge fund action encompassing Walmart Inc. (NYSE:WMT).

How have hedgies been trading Walmart Inc. (NYSE:WMT)? 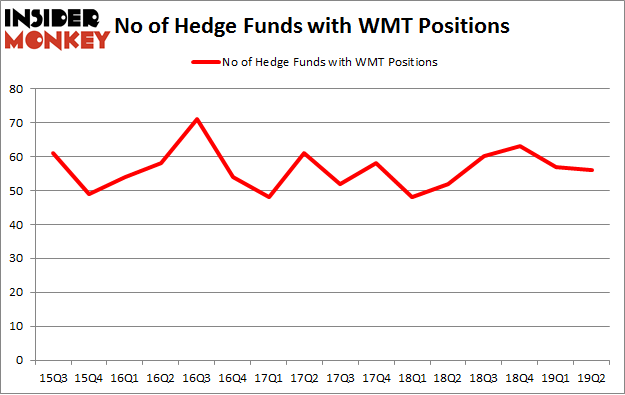 Among these funds, Bill & Melinda Gates Foundation Trust held the most valuable stake in Walmart Inc. (NYSE:WMT), which was worth $1282 million at the end of the second quarter. On the second spot was Fisher Asset Management which amassed $1174.4 million worth of shares. Moreover, AQR Capital Management, Renaissance Technologies, and D E Shaw were also bullish on Walmart Inc. (NYSE:WMT), allocating a large percentage of their portfolios to this stock.

Due to the fact that Walmart Inc. (NYSE:WMT) has witnessed falling interest from the entirety of the hedge funds we track, logic holds that there were a few hedge funds that slashed their full holdings by the end of the second quarter. It’s worth mentioning that Frank Brosens’s Taconic Capital sold off the biggest position of the “upper crust” of funds watched by Insider Monkey, totaling about $39 million in stock, and Robert Pohly’s Samlyn Capital was right behind this move, as the fund dumped about $35.7 million worth. These bearish behaviors are intriguing to say the least, as aggregate hedge fund interest dropped by 1 funds by the end of the second quarter.

Let’s go over hedge fund activity in other stocks – not necessarily in the same industry as Walmart Inc. (NYSE:WMT) but similarly valued. These stocks are The Procter & Gamble Company (NYSE:PG), Bank of America Corporation (NYSE:BAC), Mastercard Incorporated (NYSE:MA), and Royal Dutch Shell plc (NYSE:RDS). This group of stocks’ market caps are closest to WMT’s market cap.

As you can see these stocks had an average of 71.25 hedge funds with bullish positions and the average amount invested in these stocks was $13721 million. That figure was $4985 million in WMT’s case. Mastercard Incorporated (NYSE:MA) is the most popular stock in this table. On the other hand Royal Dutch Shell plc (NYSE:RDS) is the least popular one with only 34 bullish hedge fund positions. Walmart Inc. (NYSE:WMT) is not the least popular stock in this group but hedge fund interest is still below average. Our calculations showed that top 20 most popular stocks among hedge funds returned 24.4% in 2019 through September 30th and outperformed the S&P 500 ETF (SPY) by 4 percentage points. A small number of hedge funds were also right about betting on WMT as the stock returned 7.9% during the same time frame and outperformed the market by an even larger margin.