Legendary investors such as Jeffrey Talpins and Seth Klarman earn enormous amounts of money for themselves and their investors by doing in-depth research on small-cap stocks that big brokerage houses don’t publish. Small cap stocks -especially when they are screened well- can generate substantial outperformance versus a boring index fund. That’s why we analyze the activity of those elite funds in these small-cap stocks. In the following paragraphs, we analyze The Bank of New York Mellon Corporation (NYSE:BK) from the perspective of those elite funds.

The Bank of New York Mellon Corporation (NYSE:BK) investors should be aware of an increase in support from the world’s most elite money managers recently. Our calculations also showed that BK isn’t among the 30 most popular stocks among hedge funds.

Today there are tons of formulas investors can use to size up their stock investments. Some of the most useful formulas are hedge fund and insider trading sentiment. Our experts have shown that, historically, those who follow the top picks of the top hedge fund managers can trounce the market by a significant margin (see the details here).

What have hedge funds been doing with The Bank of New York Mellon Corporation (NYSE:BK)? 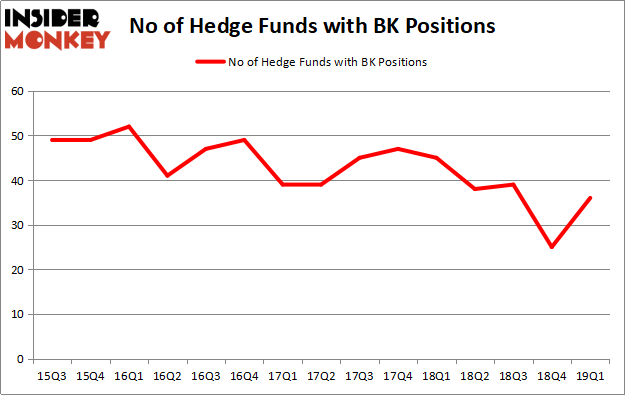 According to Insider Monkey’s hedge fund database, Berkshire Hathaway, managed by Warren Buffett, holds the biggest position in The Bank of New York Mellon Corporation (NYSE:BK). Berkshire Hathaway has a $4.0817 billion position in the stock, comprising 2% of its 13F portfolio. The second largest stake is held by Nelson Peltz of Trian Partners, with a $667.7 million position; the fund has 7.1% of its 13F portfolio invested in the stock. Some other professional money managers that hold long positions consist of Mario Gabelli’s GAMCO Investors, Donald Yacktman’s Yacktman Asset Management and John A. Levin’s Levin Capital Strategies.

Let’s check out hedge fund activity in other stocks – not necessarily in the same industry as The Bank of New York Mellon Corporation (NYSE:BK) but similarly valued. We will take a look at Honda Motor Co Ltd (NYSE:HMC), Bank of Montreal (NYSE:BMO), Infosys Limited (NYSE:INFY), and Marsh & McLennan Companies, Inc. (NYSE:MMC). This group of stocks’ market values are similar to BK’s market value.

As you can see these stocks had an average of 18.25 hedge funds with bullish positions and the average amount invested in these stocks was $570 million. That figure was $5272 million in BK’s case. Marsh & McLennan Companies, Inc. (NYSE:MMC) is the most popular stock in this table. On the other hand Honda Motor Co Ltd (NYSE:HMC) is the least popular one with only 9 bullish hedge fund positions. Compared to these stocks The Bank of New York Mellon Corporation (NYSE:BK) is more popular among hedge funds. Our calculations showed that top 20 most popular stocks among hedge funds returned 1.9% in Q2 through May 30th and outperformed the S&P 500 ETF (SPY) by more than 3 percentage points. Unfortunately BK wasn’t nearly as popular as these 20 stocks and hedge funds that were betting on BK were disappointed as the stock returned -13.7% during the same period and underperformed the market. If you are interested in investing in large cap stocks with huge upside potential, you should check out the top 20 most popular stocks among hedge funds as 13 of these stocks already outperformed the market in Q2.