Are Hedge Funds Right To Be Bullish On The Bank of New York Mellon Corporation (BK)?

Before we spend many hours researching a company, we’d like to analyze what hedge funds and billionaire investors think of the stock first. We would like to do so because the elite investors’ consensus returns have been exceptional. The top 30 mid-cap stocks among the best performing hedge funds in our database yielded an average return of 18% during the last 12 months, outperforming the S&P 500 Index funds by double digits. Although the elite funds occasionally have their duds, such as SunEdison and Valeant, the hedge fund picks seem to work on average. In the following paragraphs, we find out what the billionaire investors and hedge funds think of The Bank of New York Mellon Corporation (NYSE:BK).

The Bank of New York Mellon Corporation (NYSE:BK) was included in the 13F portfolios of 47 funds from our database at the end of the third quarter of 2016. The company saw an increase in hedge fund sentiment, since there had been 41 funds bullish on the stock a quarter earlier. However, the level and the change in hedge fund popularity aren’t the only variables you need to analyze to decipher hedge funds’ perspectives. A stock may witness a boost in popularity but it may still be less popular than similarly priced stocks. That’s why at the end of this article we will examine companies such as Kinder Morgan Inc (NYSE:KMI), Phillips 66 (NYSE:PSX), and Target Corporation (NYSE:TGT) to gather more data points.

How have hedgies been trading The Bank of New York Mellon Corporation (NYSE:BK)?

As mentioned earlier, a total of 47 investors tracked by Insider Monkey were bullish on The Bank of New York Mellon, up by 15% over the quarter, though still below the total of 52 hedgies that owned BK shares on March 31. With hedge funds’ sentiment swirling, there exists an “upper tier” of notable hedge fund managers who were boosting their holdings meaningfully (or already accumulated large positions). 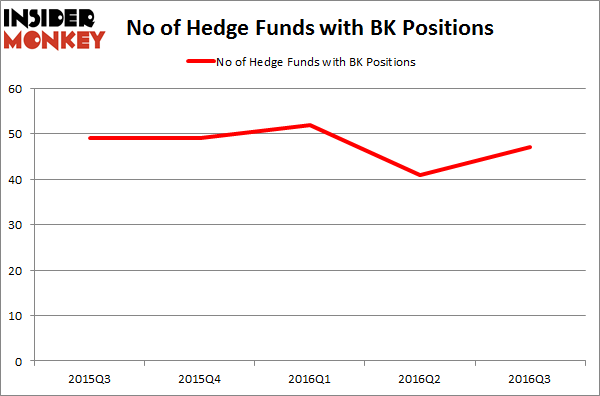