The Bank of New York Mellon Corporation (NYSE:BK) has experienced a decrease in support from the world’s most elite money managers lately. Our calculations also showed that BK isn’t among the 30 most popular stocks among hedge funds.

In the eyes of most investors, hedge funds are viewed as unimportant, old investment tools of yesteryear. While there are over 8000 funds in operation today, Our experts look at the aristocrats of this club, around 750 funds. These money managers direct the lion’s share of all hedge funds’ total asset base, and by paying attention to their highest performing picks, Insider Monkey has revealed various investment strategies that have historically outstripped the market. Insider Monkey’s flagship hedge fund strategy outrun the S&P 500 index by nearly 5 percentage points annually since its inception in May 2014 through early November 2018. We were able to generate large returns even by identifying short candidates. Our portfolio of short stocks lost 27.5% since February 2017 (through March 12th) even though the market was up nearly 25% during the same period. We just shared a list of 6 short targets in our latest quarterly update and they are already down an average of 6% in less than a month.

We’re going to take a peek at the key hedge fund action regarding The Bank of New York Mellon Corporation (NYSE:BK).

How have hedgies been trading The Bank of New York Mellon Corporation (NYSE:BK)?

Heading into the first quarter of 2019, a total of 25 of the hedge funds tracked by Insider Monkey held long positions in this stock, a change of -36% from one quarter earlier. Below, you can check out the change in hedge fund sentiment towards BK over the last 14 quarters. So, let’s review which hedge funds were among the top holders of the stock and which hedge funds were making big moves. 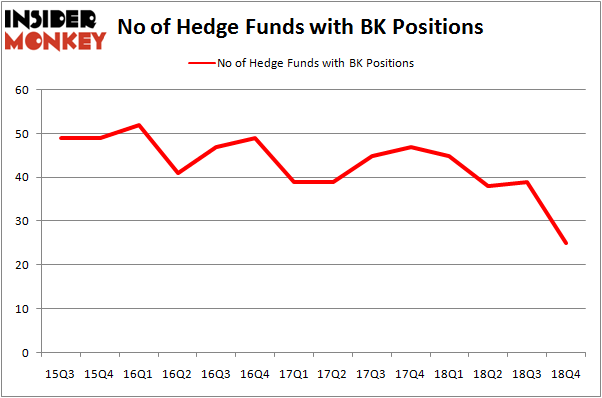 More specifically, Berkshire Hathaway was the largest shareholder of The Bank of New York Mellon Corporation (NYSE:BK), with a stake worth $3809.7 million reported as of the end of September. Trailing Berkshire Hathaway was Trian Partners, which amassed a stake valued at $759.7 million. GAMCO Investors, Yacktman Asset Management, and Levin Capital Strategies were also very fond of the stock, giving the stock large weights in their portfolios.

Because The Bank of New York Mellon Corporation (NYSE:BK) has faced a decline in interest from the aggregate hedge fund industry, it’s safe to say that there lies a certain “tier” of fund managers that decided to sell off their full holdings heading into Q3. At the top of the heap, Michael Blitzer’s Kingstown Capital Management dumped the largest position of the 700 funds followed by Insider Monkey, comprising an estimated $53.5 million in stock. Martin Whitman’s fund, Third Avenue Management, also dropped its stock, about $33.2 million worth. These moves are interesting, as total hedge fund interest dropped by 14 funds heading into Q3.

As you can see these stocks had an average of 15.75 hedge funds with bullish positions and the average amount invested in these stocks was $564 million. That figure was $5029 million in BK’s case. Occidental Petroleum Corporation (NYSE:OXY) is the most popular stock in this table. On the other hand Prudential Public Limited Company (NYSE:PUK) is the least popular one with only 9 bullish hedge fund positions. The Bank of New York Mellon Corporation (NYSE:BK) is not the most popular stock in this group but hedge fund interest is still above average. This is a slightly positive signal but we’d rather spend our time researching stocks that hedge funds are piling on. Our calculations showed that top 15 most popular stocks among hedge funds returned 19.7% through March 15th and outperformed the S&P 500 ETF (SPY) by 6.6 percentage points. Hedge funds were also right about betting on BK, though not to the same extent, as the stock returned 13.4% and outperformed the market as well.