We at Insider Monkey have gone over 730 13F filings that hedge funds and prominent investors are required to file by the SEC The 13F filings show the funds’ and investors’ portfolio positions as of June 28th. In this article, we look at what those funds think of Rio Tinto Group (NYSE:RIO) based on that data.

In the financial world there are numerous metrics market participants put to use to analyze their holdings. Some of the less known metrics are hedge fund and insider trading signals. Our experts have shown that, historically, those who follow the top picks of the elite investment managers can outperform the market by a solid amount (see the details here).

Unlike some fund managers who are betting on Dow reaching 40000 in a year, our long-short investment strategy doesn’t rely on bull markets to deliver double digit returns. We only rely on hedge fund buy/sell signals. Let’s take a gander at the fresh hedge fund action encompassing Rio Tinto Group (NYSE:RIO). 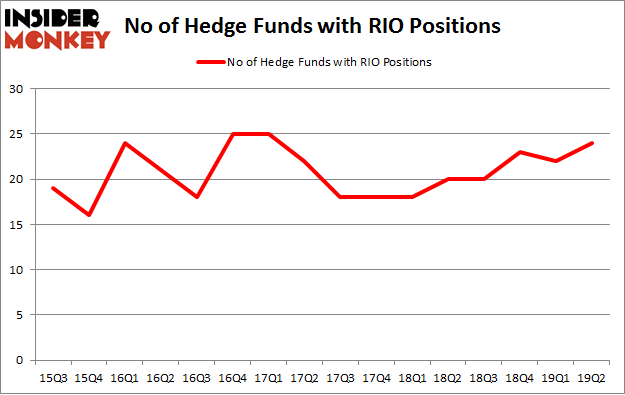 The largest stake in Rio Tinto Group (NYSE:RIO) was held by Arrowstreet Capital, which reported holding $735.6 million worth of stock at the end of March. It was followed by Fisher Asset Management with a $658.8 million position. Other investors bullish on the company included Impala Asset Management, Two Sigma Advisors, and Citadel Investment Group.

As you can see these stocks had an average of 40 hedge funds with bullish positions and the average amount invested in these stocks was $7316 million. That figure was $1914 million in RIO’s case. Starbucks Corporation (NASDAQ:SBUX) is the most popular stock in this table. On the other hand The Toronto-Dominion Bank (NYSE:TD) is the least popular one with only 18 bullish hedge fund positions. Rio Tinto Group (NYSE:RIO) is not the least popular stock in this group but hedge fund interest is still below average. This is a slightly negative signal and we’d rather spend our time researching stocks that hedge funds are piling on. Our calculations showed that top 20 most popular stocks among hedge funds returned 24.4% in 2019 through September 30th and outperformed the S&P 500 ETF (SPY) by 4 percentage points. Unfortunately RIO wasn’t nearly as popular as these 20 stocks (hedge fund sentiment was quite bearish); RIO investors were disappointed as the stock returned -12.9% during the third quarter and underperformed the market. If you are interested in investing in large cap stocks with huge upside potential, you should check out the top 20 most popular stocks among hedge funds as many of these stocks already outperformed the market so far in 2019.

Were Hedge Funds Right About Abandoning Abbott Laboratories (ABT)?
Monthly Newsletter Strategy
Download a free copy of our newsletter and see the details inside!
Hedge Fund Resource Center
Related News
Were Hedge Funds Right About Buying Rio Tinto Group (RIO)? Should You Buy Rio Tinto plc (RIO)? Is Rio Tinto (RIO) A Hidden Gem or a Chunk of Coal? Billionaire Ken Fisher is Bullish About These Dividend Stocks Five Uranium Stocks to Buy According to Hedge Funds Do Hedge Funds Love Rio Tinto plc (ADR) (RIO)? Why Are These Five Stocks on the Move Today? 10 Biggest Companies That Offer Pensions 15 Wealthiest Families in the World vs. First Generation Ultra Billionaires 5 Makeup Companies that Don’t Test on Animals
Billionaire Hedge Funds