The fourth quarter was a rough one for most investors, as fears of a rising interest rate environment in the U.S, a trade war with China, and a more or less stagnant Europe, weighed heavily on the minds of investors. Both the S&P 500 and Russell 2000 sank as a result, with the Russell 2000, which is composed of smaller companies, being hit especially hard. This was primarily due to hedge funds, which are big supporters of small-cap stocks, pulling some of their capital out of the volatile markets during this time. Let’s look at how this market volatility affected the sentiment of hedge funds towards News Corp (NASDAQ:NWS), and what that likely means for the prospects of the company and its stock.

Is News Corp (NASDAQ:NWS) an excellent investment right now? The smart money is becoming more confident. The number of long hedge fund positions moved up by 3 recently. Our calculations also showed that NWS isn’t among the 30 most popular stocks among hedge funds.

What does the smart money think about News Corp (NASDAQ:NWS)? 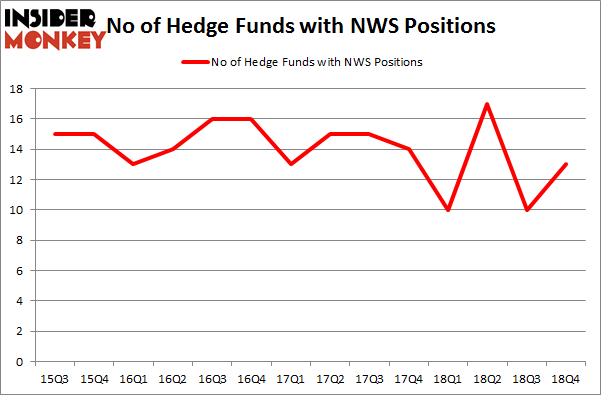 Among these funds, International Value Advisers held the most valuable stake in News Corp (NASDAQ:NWS), which was worth $43.6 million at the end of the third quarter. On the second spot was Tensile Capital which amassed $13.1 million worth of shares. Moreover, GAMCO Investors, Citadel Investment Group, and Renaissance Technologies were also bullish on News Corp (NASDAQ:NWS), allocating a large percentage of their portfolios to this stock.

As industrywide interest jumped, specific money managers have been driving this bullishness. Millennium Management, managed by Israel Englander, created the largest position in News Corp (NASDAQ:NWS). Millennium Management had $0.5 million invested in the company at the end of the quarter. Paul Marshall and Ian Wace’s Marshall Wace LLP also made a $0.2 million investment in the stock during the quarter. The other funds with new positions in the stock are Matthew Hulsizer’s PEAK6 Capital Management, Gavin Saitowitz and Cisco J. del Valle’s Springbok Capital, and Claes Fornell’s CSat Investment Advisory.

As you can see these stocks had an average of 24.5 hedge funds with bullish positions and the average amount invested in these stocks was $458 million. That figure was $72 million in NWS’s case. Black Knight, Inc. (NYSE:BKI) is the most popular stock in this table. On the other hand Telecom Argentina S.A. (NYSE:TEO) is the least popular one with only 9 bullish hedge fund positions. News Corp (NASDAQ:NWS) is not the least popular stock in this group but hedge fund interest is still below average. This is a slightly negative signal and we’d rather spend our time researching stocks that hedge funds are piling on. Our calculations showed that top 15 most popular stocks among hedge funds returned 21.3% through April 8th and outperformed the S&P 500 ETF (SPY) by more than 5 percentage points. Unfortunately NWS wasn’t in this group. Hedge funds that bet on NWS were disappointed as the stock returned 10.2% and underperformed the market. If you are interested in investing in large cap stocks, you should check out the top 15 hedge fund stocks as 12 of these outperformed the market.