We know that hedge funds generate strong, risk-adjusted returns over the long run, which is why imitating the picks that they are collectively bullish on can be a profitable strategy for retail investors. With billions of dollars in assets, professional investors have to conduct complex analyses, spend many resources and use tools that are not always available for the general crowd. This doesn’t mean that they don’t have occasional colossal losses; they do. However, it is still a good idea to keep an eye on hedge fund activity. With this in mind, let’s examine the smart money sentiment towards Otis Worldwide Corporation (NYSE:OTIS) and determine whether hedge funds skillfully traded this stock.

Otis Worldwide Corporation (NYSE:OTIS) was in 56 hedge funds’ portfolios at the end of the second quarter of 2020. The all time high for this statistics is 4. This means the bullish number of hedge fund positions in this stock currently sits at its all time high. OTIS has seen an increase in hedge fund sentiment recently. There were 4 hedge funds in our database with OTIS positions at the end of the first quarter. Our calculations also showed that OTIS isn’t among the 30 most popular stocks among hedge funds (click for Q2 rankings and see the video for a quick look at the top 5 stocks).

In the financial world there are a large number of tools stock market investors put to use to value publicly traded companies. Two of the most innovative tools are hedge fund and insider trading interest. Our experts have shown that, historically, those who follow the best picks of the best investment managers can outpace the market by a solid margin (see the details here).

At Insider Monkey we scour multiple sources to uncover the next great investment idea. Federal Reserve has been creating trillions of dollars electronically to keep the interest rates near zero. We believe this will lead to inflation and boost precious metals prices. So, we are checking out this junior gold mining stock.. We go through lists like the 10 most profitable companies in America to pick the best large-cap stocks to buy. Even though we recommend positions in only a tiny fraction of the companies we analyze, we check out as many stocks as we can. We read hedge fund investor letters and listen to stock pitches at hedge fund conferences. If you want to find out the best healthcare stock to buy right now, you can watch our latest hedge fund manager interview here. Now we’re going to take a look at the key hedge fund action encompassing Otis Worldwide Corporation (NYSE:OTIS). 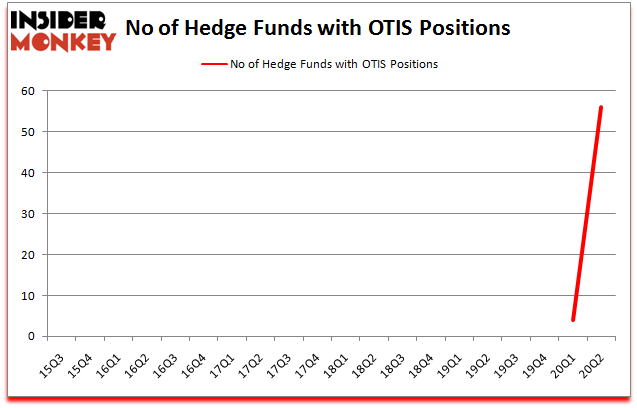 Among these funds, Ako Capital held the most valuable stake in Otis Worldwide Corporation (NYSE:OTIS), which was worth $304.4 million at the end of the third quarter. On the second spot was Deccan Value Advisors which amassed $252.9 million worth of shares. Adage Capital Management, Suvretta Capital Management, and Gates Capital Management were also very fond of the stock, becoming one of the largest hedge fund holders of the company. In terms of the portfolio weights assigned to each position Sandbar Asset Management allocated the biggest weight to Otis Worldwide Corporation (NYSE:OTIS), around 15.39% of its 13F portfolio. Deccan Value Advisors is also relatively very bullish on the stock, earmarking 13.05 percent of its 13F equity portfolio to OTIS.

With a general bullishness amongst the heavyweights, key hedge funds were leading the bulls’ herd. Ako Capital, managed by Nicolai Tangen, assembled the most outsized position in Otis Worldwide Corporation (NYSE:OTIS). Ako Capital had $304.4 million invested in the company at the end of the quarter. Vinit Bodas’s Deccan Value Advisors also initiated a $252.9 million position during the quarter. The other funds with brand new OTIS positions are Phill Gross and Robert Atchinson’s Adage Capital Management, Aaron Cowen’s Suvretta Capital Management, and Ken Fisher’s Fisher Asset Management.

As you can see these stocks had an average of 28.7 hedge funds with bullish positions and the average amount invested in these stocks was $683 million. That figure was $2110 million in OTIS’s case. Marathon Petroleum Corp (NYSE:MPC) is the most popular stock in this table. On the other hand Barclays PLC (NYSE:BCS) is the least popular one with only 8 bullish hedge fund positions. Otis Worldwide Corporation (NYSE:OTIS) is not the most popular stock in this group but hedge fund interest is still above average. Our overall hedge fund sentiment score for OTIS is 84.4. Stocks with higher number of hedge fund positions relative to other stocks as well as relative to their historical range receive a higher sentiment score. Our calculations showed that top 10 most popular stocks among hedge funds returned 41.4% in 2019 and outperformed the S&P 500 ETF (SPY) by 10.1 percentage points. These stocks gained 28.2% in 2020 through August 24th but still beat the market by 20.6 percentage points. Hedge funds were also right about betting on OTIS, though not to the same extent, as the stock returned 12.6% since the end of June and outperformed the market as well.

Experts Disagree About What Tesla Battery Day Will Do To Stock

Unity Software: Breaking Down S-1 Filing
Monthly Newsletter Strategy
Download a free copy of our newsletter and see the details inside!
Hedge Fund Resource Center
Related News
14 Countries That Produce the Most Titanium in the World 10 Largest Silver Producing Countries in the World 7 Easiest Countries to Immigrate To: 2020 Rankings
Billionaire Hedge Funds